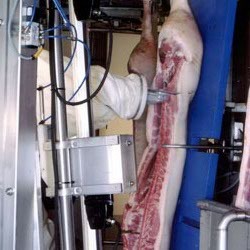 The science fiction of factories staffed by robotic workers has rapidly become reality in many industries and is now immersed in taking on the challenge of natural systems. For the past 6 years Scott Technology’s Dunedin based Robotic Technologies and partner Silver Fern Farms have been meeting the challenges of the highly paced meat processing industry with robotics and machine vision. The robotic systems work together to form a fully automated boning room located at Finegand Freezing works in South Otago, New Zealand. They are tested and refined whilst functioning alongside a human workforce, processing around 1.8 million lambs per year.

Since robots were first conceived of, the overriding aim has been for them to perform jobs that are mundane, repetitive and dangerous, freeing us from the yoke of servitude. The lamb forequarter cutting system in the boning room is an ideal example. The boning automation begins with the ‘Primal System’ scanning the carcass via x-ray, then cutting the hindquarter, middle (saddle) and forequarter. The forequarter system is comprised of the KUKA KR-60, 6 axis industrial robot, equipped with a purpose built end-effector to grip and manipulate the cut forequarter and a vertical bandsaw to part out the meat. There is no chance of the meat slipping in the hands, as often happens to process workers who are unable to wear protective mesh gloves which can catch on the bandsaw blade. The bandsaw itself is mounted in a unit with servo controlled z rotation; its movements precisely controlled by the robot. The forequarter is split and the brisket, neck and shanks are cut. While knuckle tipping can be a separate operation, it is usually also performed by the robot/bandsaw system and can be accurately located and cut at high speed.

A meat workers often lasts only about 5 years in the job as the physically difficult and repetitive nature of the work takes its toll. Furthermore, despite strict health and safety policy, the job is hazardous and accidents with the bandsaw occur frequently. According to Meat and Livestock Australia, there are approximately 1000 bandsaws in use in Australian meat works and butcher shops. Evidence suggests 6 to 10 serious accidents occur each year. Lacerations, amputations and musculoskeletal injuries are common, estimated by New Zealand’s ACC (Accident Compensation Corporation) at 51 injuries per 1000 meat processing workers.

Scott’s Machine Vision Team Leader, Donald Liddell, is quick to point out “We are not trying to replace people per sey, but trying to reduce hazardous tasks. The robot could be resented but actually it’s welcomed and the workers grumble when it’s off-line.” He explains “The process workers are paid in throughput, [which is set by the automated system] so when the system is more productive, they all get paid more.”

The lamb carcasses can vary greatly due to time of year, age and general variations in anatomy. 3D vision systems are ideal in situations like these, where variability is an intrinsic feature of the product itself. Scott’s system deals with this complex topography by using laser triangulation, combining the information from three SICK laser line scanner units that project a laser stripe onto the forequarter to gain detailed 3-dimensional information. The units are set at right angles to each other, effectively completely mapping the forequarter, locating cut-points on all product types. While the CMOS image sensor can produce a massive 10,000 profiles/second, 1000 profiles per second are captured for analysis as the robot draws the forequarter past the scanner. The three scanner system gives a 0.6 second scanning time and the analysis of the entire model takes only 0.75 seconds. SICK components are readily available worldwide, few compare to the speed and accuracy available from these components, offering excellent value for money. The units are rugged and ideally suited to an industrial environment.

The laser line scanner projects a narrow band of light onto a three-dimensionally shaped surface which produces a line of illumination that appears distorted from other perspectives. Stripe width becomes a function of the steepness of a surface. The recorded displacement of the stripe can then be directly converted into 3D coordinates, known as a point cloud, and processed with Scott’s specialised in-house software to create an exact geometric reconstruction of the surface shape. Scott’s team of PhD qualified machine vision specialists developed the 3D analysis software, primarily written in C++. The software not only analyses the data received from the laser scanner and creates the digital image of the forequarter, but also deals with noise reduction algorithms and other functions to ensure an accurate and functional image. A simple user interface is provided for an operator to interact with the system.

The robot arm is used to draw the forequarter through the scanning area, eliminating the need for extra handling. The robot also provides real-time positional data to the vision system, delivering the speed and position of the robot when each profile was captured. This data is then used to calculate the distance between profiles. The resulting image locates features such as the neck, knuckles and elbows and guides both the robot and the bandsaw movements in harmony. The required cuts are placed quickly and accurately with the system as a whole achieving +/-1 mm accuracy

With a more complete image of both the internal bone structure and the external profile of the meat than a human can achieve, the robot can process the forequarter to not only increase the yield but repeatedly improve the quality of each cut of meat, greatly increasing its market value. Although the yield increase per carcass from the forequarter system is 5g, with the Finegand plant processing an average of 1.8million units per year, an added total of 9000kg of high value meat is achieved. As recently reported by Grant Pearson, Silver Fern Farm’s General Manager of Innovation, this can mean a 2-5% revenue gain just by optimising cut decisions.

Although the forequarter systems has been working effectively in a production environment for 6 years it still requires some refining before its commercial release. With the aim of processing 10 forequarters per minute there are improvements to be gained in cycle time. However the most valuable aspect of the system is its ability to protect workers from a difficult and dangerous task. This will help to attract and retain the labour force, ensure a safe operational environment and still allow maximum conversion of raw product to high value cuts; attractive results for any company wishing to stay competitive. To learn more, please visit our Meat Processing section or give us a call at 740-251-4312; you can also reach our representatives online.