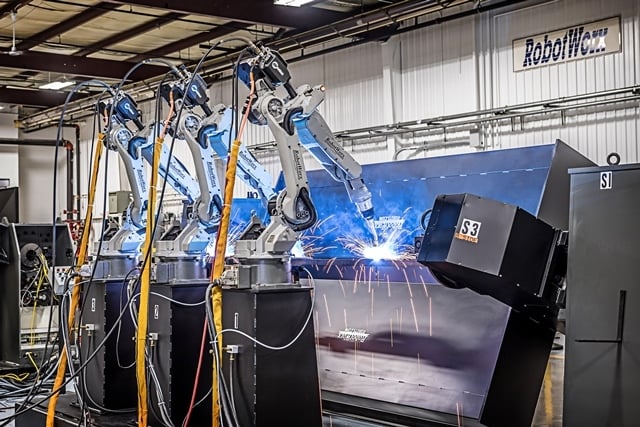 The first industrial robot was introduced to the U.S. in the 1960s. Since then, their technology has improved immensely creating many advantages of robots. The advancement of robotics has also caused robots to become more widespread across various industries ranging from manufacturing to health care. Many benefits of robots seem to be most noticeable in productivity, safety, and in saving time and money.

Robots produce more accurate and high quality work.
Robots rarely make mistakes and are more precise than human workers.
They can produce a greater quantity in a short amount of time.
They can work at a constant speed with no breaks, days off, or holiday time.
They can perform applications with more repeatability than humans.

Robots save workers from performing dangerous tasks.
They can work in hazardous conditions, such as poor lighting, toxic chemicals, or tight spaces.
They are capable of lifting heavy loads without injury or tiring.
Robots increase worker safety by preventing accidents since humans are not performing risky jobs.
Workcells provide safety features, separating the worker from harms way.

Robots save time by being able to produce a greater magnitude of products
They also reduce the amount of wasted material used due to their accuracy
Robots save companies money in the long run with quick ROIs (return on investment), fewer worker injuries (reducing or eliminating worker’s comp), and with using less materials.

The list of the advantages of robots does not end there; they have also created jobs for workers. Many people believe the misconception that robots have taken away jobs from workers, but that is not necessarily true. Robots have created new jobs for those who were once on production lines with programming. They have pulled employees from repetitive, monotonous jobs and put them in better, more challenging ones. They also allow US companies to remain competitive, keeping jobs local. Robots are user-friendly, intelligent, and affordable. The benefits of robots continue to grow as more industries incorporate them. Contact RobotWorx at 740-251-4312 for help in choosing the right robot or get free price quotes.