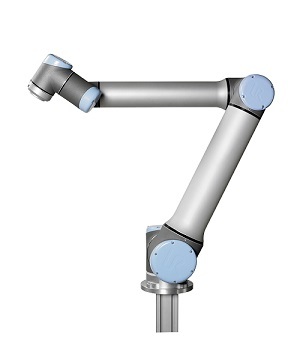 When you first look at a robot from Universal Robots (UR), it may look more like a prototype than an advanced industrial robot. Unlike the big, burly traditional robots working in industrial complexes all over the world, the Universal robot is a sleek, versatile model that is engineered to work with or around humans, without risk of injury if a human gets too close.

Universal Robots believes that collaborative technology can be used to benefit any task-based business, no matter what their size, and those robots can be used at all levels of production to increase productivity, reduce injury, and boost morale. According to UR, they are building robots so they will be available to all businesses – more affordable, with a better payback period. Companies could expect to recover their initial investment in just a six month time period.

There are several other advantages to investing robots from UR. These collaborative robotic systems have a fast setup and easy programming. A robot operator with no programming ability can quickly setup a UR robot and begin programming it. These robots are also quick to re-deploy to other applications and other areas in your production line. They are lightweight and space saving as well.

All in all, Universal Robots build systems that are great for collaboration and flexibility in layout and production design.

There are many robots that offer flexibility and collaboration for industrial automation. Many of these robot models can be found at RobotWorx, a leader in robotics integration. For more information about collaborative robotics, contact RobotWorx today at 740-251-4312.