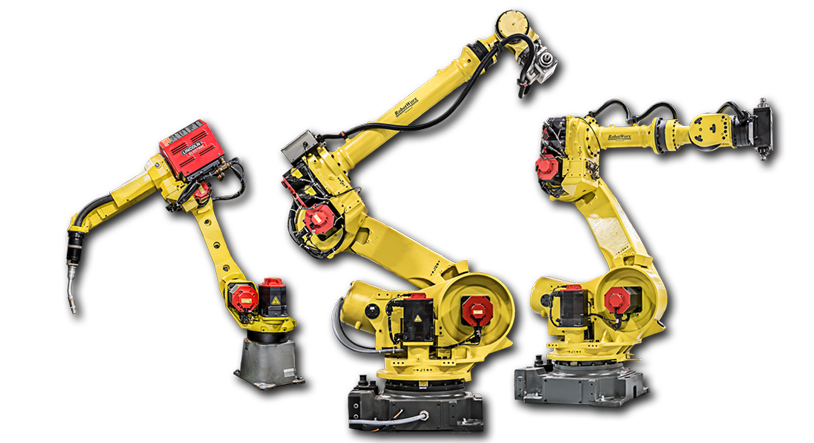 When it comes to industrial robots, Fanuc Robotics is one of the best known names in the industry. The company supplies countries around the world, selling well over 250,000 to date.

The company designs and manufactures Fanuc robots to perform a wide variety of applications including arc and spot welding, material handling, material removal, assembly, painting, and dispensing. In addition to the robots produced, the company also develops controllers, software, and other products that go hand-in-hand with their state-of-the-art machinery.

For over 40 years, Fanuc has been supplying world-wide industry with the technology and equipment they need to produce some of the highest quality products in the world.

Fanuc Robotics started out as part of the Fujitsu Corporation and the name is actually an acronym that stands for Fuji Automatic Numerical Control. They have been producing high-quality robotics since 1972 and are one of the primary robot suppliers to both the Japanese and United States automobile industry.

In 1992, Fanuc LTD in Japan bought out General Motor’s shares of GMFanuc (GMF), a partnership between GM and Fanuc, and GMFanuc became Fanuc Robotics North America.

Fanuc Robotics America Corp. now has its headquarters in Rochester Hills, MI with regional offices in:

As a leader in the robotic industry, Fanuc has won many awards in the past, including the Nissan’s Worldwide Global Innovation Award, and several recent awards, including the 2011 & 2012 Leadership in Packaging from Packaging World Magazine, the 2011 Automation World’s Leadership in Automation Award, the Automotive Industries Quest for Excellence Award, and the Henry Ford Technology Award.

Fanuc has also been added to many lists, including the 2012 Thompson Reuters Top 100 Global Innovators the 2012 Detroit Free Press Top 100 Workplaces, and the company was named one of the world’s most innovative companies by Forbes Magazine.

Few other companies have done as much to innovate and advance the field of robotics as Fanuc. Whether a company is looking for a robot to handle welding, painting, installation or another specialty application, the company has a quality, reliable solution to fit the customer’s needs.

The robots they produce have become so popular among a variety of different leading manufacturers because they deliver outstanding results on a consistent basis. These robots can work seven days a week, 24 hours a day nonstop. A little time spent with one of these high-quality machines and it is no wonder that this company is one of the world's largest robotic manufacturers.

Many companies invest in Fanuc Robotics industrial arms for their own projects. Shell Oil worked with Fanuc in the past to develop solar panels. Another leading electronics manufacturer was able to produce two million televisions ever month with only 15 people on the workforce, due to Fanuc’s robotic automation.

Fanuc has partnered with many companies like GM over the years to expand their product base further. Companies like Biomation and Robotic Production Technology have teamed up with Fanuc in the past to develop Fanuc’s systems and sell them to new markets.

Any company or manufacturer in the market for industrial robot should put a Fanuc robot at the top of the list. These machines can also be purchased used from retailers, like RobotWorx, that understand exactly how to help companies get the most from these pieces of equipment. Buying a used robot is an excellent choice for any company that is interested in industrial automation and adding a robot to their manufacturing process without the expense associated with a brand-new unit. A used Fanuc robot is also an excellent choice because they are fully refurbished and come with a full warranty.

If you would like more information about Fanuc robots, or how to begin automating your shop with Fanuc, contact RobotWorx today online or at 877-762-6881. RobotWorx provides solutions from Fanuc Robotics.