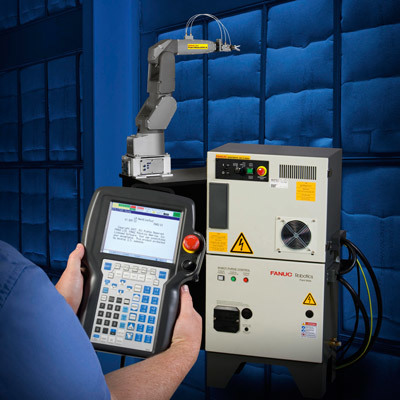 Simulation software is probably one of the biggest time saving innovations ever developed in the robotics industry. With simulation software, an engineer can plan a system with the client in a virtual space, which allows the design team to work out any bugs or kinks in the design plan prior to fabrication. FANUC introduced one version of simulation software, the FANUCWorks program, in 2003, and then moved on to the more modern RoboGuide in later years.

FANUCWorks was an innovative program when it was released a decade ago. This three-dimensional simulation tool was able to help designers cut down on development and programming times for their robot systems, according to a 2003 FANUC press release. The FANUCWorks program was based on the SolidWorks CAD platform that came before it, and was able to move a robot virtually along a path to find the best trajectory for an application, which helped to cut cycle times, as well as checking for possible collision issues with other machinery that exist in the real space.

In 2006, FANUC introduced a new offline simulation software that seemed to be an expansion of the FANUCWorks program. That software was called RoboGuide, and it is still in use today. RoboGuide has the same advantages as FANUCWorks, with a more up-to-date interface for users. Also, RoboGuide has several different variations – HandlingPRO, PaintPRO, PalletPRO, and WeldingPRO, to name a few. This was just another step in FANUC’s journey to build and design better robot systems for their customers.

These two software systems are mostly utilized by robotic integrators like RobotWorx. RobotWorx is a certified integrator for FANUC Robotics and has been in business for more than 20 years, building our customers the best robotic systems for the lowest price available. We use software like FANUCWorks and RoboGuide to plan and design new and used systems for our customers, a practice that helps to build an even better system than was possible over a decade ago. Our staff will work with you to design the perfect system for your facility using all the tools available to us.

For more information about automating with a system from RobotWorx, contact us online or at 740-251-4327.