How do they do that? Putting together the robotic arm 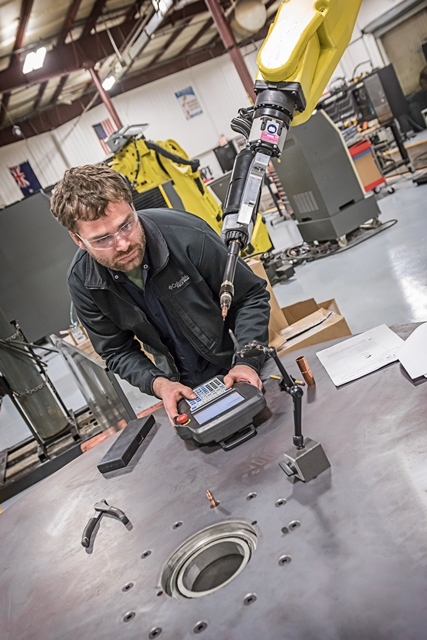 Industrial robotic arms have been assisting humans in manufacturing for decades. The idea of using industrial robotics for applications, in place of manual processes, took off in the 1980s, and manufacturers haven’t looked back.

But, how are these machines put together? How are these complex arms that operate with such speed and accuracy built?

Robotic arms are associated with automation sciences, a part of science that uses machines and computers that can learn or perform operational tasks. These robot arms start much like anything else – a design.

During the design process, engineers must decide which job the robot will perform, as well as what speed and accuracy it will perform this task with, along with other variables like environment, types of materials involved in the process, etc.

After the design process, the entire design is fabricated with metals like steel, aluminum and cast iron. While the components used to fabricate the robot are fairly common, the process of assembling the robot is not. Many companies, like Fanuc Robotics, actually use industrial robots to build parts of the industrial robotic arms and controllers, as well as using their accuracy for the assembly process.

Once pieces are fabricated and machined, the engineers and technicians assemble robots from the base, which is the heaviest, to the wrist (typically the lightest part of the robotic arm). The fabricated metal pieces are combined with purchased electric motors, cables and sensors to create an arm that operates much like a human arm with a shoulder, elbow and wrist. These robot arms can have from 4-6 joints, and have several degrees of freedom.

Once the robotic arm is built, it is run through a rigorous quality control process to test the speed and accuracy of the unit. It is then sent out for installation at the consumer’s facility.

While RobotWorx does not build robot arms from scratch, this robotic integrator does refurbish old systems from the ground up, as well as customizing refurbished and new robots to fit our customers’ needs. We have a team of highly-trained individuals that work with our customers to design the perfect layout and system for their facility.

RobotWorx will build a robotic system that is right for your facility’s automation conversion. Call us today at 877-762-6881 for more information about how to get this process started or get in touch with a sales representative online.