Human-Robot Collaboration with the ABB YuMi 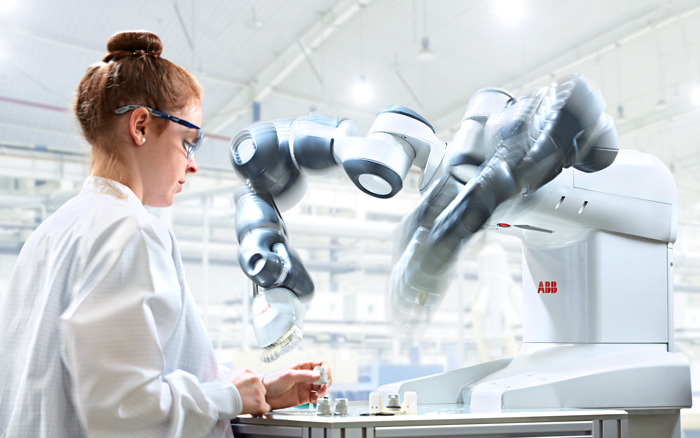 ABB Robotics has continued to push the envelope of innovation again and again during the 40 years it has existed in the robot industry. They have done so again with the development of the ABB YuMi, a dual-armed robot that will allow for easier collaboration between humans and robots.

At first glance, YuMi, which stands for “you and me”, looks a lot like a headless human, which is not quite as gross as it may seem. With dual arms that can work together or separately, YuMi from ABB is able to work with a great level of precision, which makes it a perfect for the consumer electronics industry. What better than a robot that is able to assemble a portion of a cell phone or computer using two hands instead of just one? This could mean better precision for the small parts assembly application or faster cycle times when the application only calls for one arm, allowing the robot to accomplish twice as much. The robot is so precise that it can thread a needle, according to ABB Robotics.

However, the dual arms of YuMi are not the only thing that has manufacturers excited. The ABB YuMi system is one of the first robots designed to work alongside humans in close proximity. YuMi has several sensors that allow it to see and feel. It is also outfitted with padded arms, which allow for a soft landing if it nudges its human counterpart. This improves the human-robot collaboration efforts and does away with caging and other features once necessary for robots.

Are you interested in learning more about ABB Robotics’ YuMi system? If so, then you should call RobotWorx provides robots from several different robotics companies, including ABB. Our staff will work with you to help you customize and integrate the perfect system for your facility, whether it be YuMi or another robot from the ABB line.