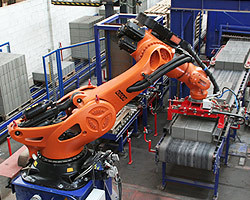 Fanuc Robotics is working to increase efficiency in the production of construction materials using robotic systems. Using robots and work cells to cut, stack, bundle, package, and palletize materials increases efficiency because robot systems can perform tasks faster and with better accuracy. The robots that Fanuc Robotics has created can manipulate fiberglass insulation, polyisocyanurate board insulation, house wrap, and pipe foam insulation to fit each customer’s unique order, and they can do it with little downtime.

One facility estimated that its Fanuc Robotics system could cut, put into cartons, palletize, and unitize 42 linear meters of polyisocyanurate board insulation per minute. However, different laminating conditions produce even faster times, up to 67 meters per minute. Companies that integrate robots into their workflow become more efficient and more competitive.

Construction robots are also used in the handling and manipulation of bricks and other heavy blocks. Brick and concrete block laying can be challenging both physically and mentally when performed through human labor. While not many robots have been utilized on the job yet, trials have shown how robot use in this field could prove beneficial. A brick factory in France, Lhoist Refractaires, uses robotic systems for palletizing bricks. Generally, brick laying robots are built with vacuum grippers that can determine differences in blocks and manipulate the brick or concrete block.

Robotic systems can also be utilized to dispense concrete on the job site. Instead of human labor applying the concrete, a robot can layer concrete vertically to form a structure. This process is similar to the application of adhesive process, except that concrete is much heavier than typical adhesives.

Robots and Efficiency in Japanese Construction

Welding time on Japanese construction sites has dropped dramatically since the implementation of robotic welding systems. One firm developed a system that uses two six-axis robots to weld structural steel for buildings. The I-beams are cut and welded prior to being delivered to the construction site, resulting in little welding needing to be done onsite. Prior to delivery, holes for plumbing and electrical systems are cut into the beams. These cuts must be made with exceptional accuracy, usually within 0.16 mm. After the cuts are made, the robots attach a unique part number to each beam to ensure that each beam gets used for the right job. The efficiency of this robotics system has decreased the time it takes to put up steel in a building, allowing more time to develop other projects.