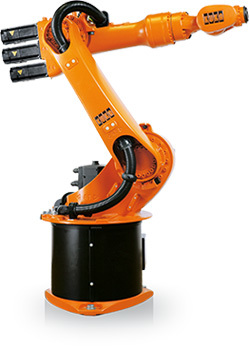 The story of KUKA welding robots does not start with the development of industrial robotics. Instead, this story starts back in the 1800s, when welding was manually applied.

Back in 1898, the only KUKA welders available were manual welding apparatuses. Hans Keller and Jakob Knappich founded KUKA engineering works in Augsburg, Germany in 1898. A KUKA welder back then didn’t look like much more than a metal barrel with hoses and piping. It would take over 50 years and a takeover before KUKA welding would take a major step forward.

After the Quandt group took hold of KUKA in 1950, the company developed KUKA’s first multi-welding system for Volkswagen. This move is what laid the first bricks for KUKA’s path as a leader in the welding industry today.

A decade later, KUKA produced the first friction welding machine, and in 1971, KUKA welding hit a new level when the company introduced the first welding system that incorporated industrial robots – though KUKA did not make the robots at the time.

Once the production of KUKA welding robots started in 1973, the company gave the world the first six-axis robot. They also presented even more welding applications and possibilities for manufacturers. From that time forward, KUKA has continued to innovate and soar high in the welding industry.

KUKA welding robots are top of the line and constantly improving. KUKA welding is used by several industries today, including the automotive, aerospace, jewelry, furniture, consumer goods and beverage industries.

RobotWorx, a certified integrator for KUKA robotics, has several different KUKA welding robotic models available for purchase. RobotWorx takes KUKA welding robots and customizes them to the customer’s specifications, matching the robot with a welding package and safety package.

If you are interested in learning more about automating your current welding system with KUKA welding, contact RobotWorx today online or at 877-762-6881.