Making the Transition from Manual to Robotic Assembly 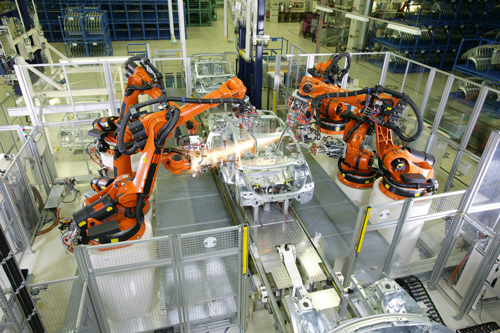 There is nothing quite like watching an assembly robot working on a line. The tireless reliability and efficiency of the robotic assembly arm is a sight to behold. However, these amazing systems don’t just pop into existence. They are not born – they are made.

An assembly robot is brought into the world the same way as all other robot arms – design, fabrication and assembly. Engineers build the robot from base to wrist, and then connect everything to the controller.

However, it is the transitioning a facility from manual to robotic assembly that can lead a manufacturer to problems and headaches down the road if not done correctly.

The first thing a manufacturer needs to do is figure out what each human worker is doing on the line during the assembly process, as well as what they do with the parts they assemble. Then, while working with engineers, the manufacturer needs to figure out how to translate that into how a robot would handle the parts. Robot assemblers tend to have different tolerances than human hands, and also handle parts in a different nature than a human worker, hence the need for the translation process.

Engineers will figure out the range of part variables, which will allow the robot to decipher the difference between an acceptable and unacceptable part. The manufacturer and engineers may have to take a look at their end product and figure out if they have to redesign and rework the way the item is assembled before robotic assemblers can take over the process.

RobotWorx, a certified integrator for robot models from Fanuc, Motoman ABB, Universal Robots, and KUKA robotics, as well as other manufacturers, works with customers to customize assembly robots to fit their facility’s automation needs. RobotWorx’ highly trained staff can work with you to figure out the right robotic assembly system for your production line.