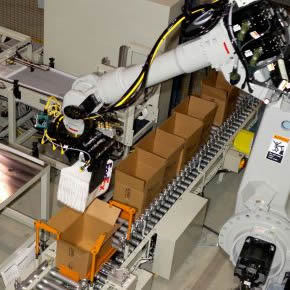 While it was once thought that fixturing should be integrated as a go-between for man and machine during automated robot processes, that line of thought has been eradicated with the new national robot safety standard by the American National Standards Institute.

This is the first update for the standard ANSI/RIA R15.06-2012 since 1999, and this change now harmonizes it with International ISO 10218:2011 standard for robot manufacturers and integrators.

The adoption of this standard internationally allows systems designed and built in one country to be moved freely between countries without falling out of compliance with safety regulations.

This new standard features “collaborative operation,” a measure that introduces a worker into active interaction during automatic robot operation. Now, systems can be designed with the operator directly loading and unloading the robot, which eliminates costly fixtures that were once the middleman between the operator and the robot.

Another feature is the “safety-rated soft axis and space limiting” technology, which allows safety-rated software to control the robot motion so the restricted space is more flexible.

For more information about automation possibilities in your facility and what RobotWorx can do for you, contact our sales department today online or at 740-383-8383.