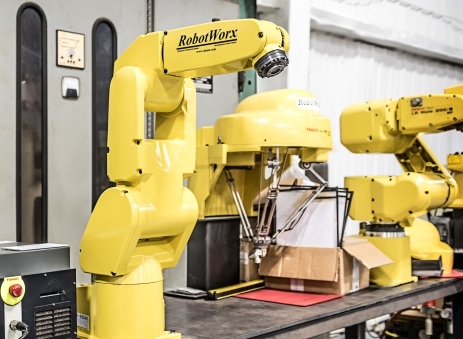 Wooden wind-up dolls appeared in Japan as early as the 17th century. Japan’s interest in robots has continued ever since. A machine that wore a kimono and served tea is especially famous, as it is considered one of the world’s first robots. It carried a bowl of tea on a tray to a guest, waited until the guest replaced the bowl, and then returned to the host. The Japanese do not feel threatened by robots as some other countries do, and robotics technology in Japan has the potential to push the envelope in many kinds of applications.

The history of Fanuc, created in Japan, has been recognized as the history of CNC itself. In 1956, the first Numerical Control system in the Japanese private sector was developed successfully. By 1960, the first open loop NC, Fanuc 220, was developed. Fanuc now also has major corporation headquarters in the United States and Luxembourg as well. Throughout the years, Fanuc has proved to be the leading global manufacturer of factory automation. A total of 250,000 robots are installed worldwide, suitable for applications such as assembly, packing, machine tending, material removal, welding, and dispensing.

The Japanese are at the forefront of using service robots, robots that are used outside an industrial facility. Service robots can be used for professional jobs like military tasks, underwater jobs, cleaning hazardous waste, etc. They can also be tapped for personal use, like house cleaning and entertainment. One area in which personal robots are being used more frequently is in the care for the elderly. Because more than a fifth of the population in Japan is elderly, there are increasingly fewer numbers of young people to care for them. Robots can provide physical services such as carrying elderly people or doing their day-to-day tasks.

Japan is the country that is probably closest to a future where robots and humans live together compatibly. Robots have already infiltrated the Japanese factories; human workers might be greeted on their first day by a robot receptionist. While robots are a long way from matching human expressions and emotions, engineering students in Japan are working on a robot face that can simulate six basic expressions. Humanoid robots are just the tip of the iceberg, however. Japanese robotic companies are working to discern exactly which types of robots that people will buy and use.

Japan also intends for robots to replenish the workforce as more human workers retire. As the cost of machinery decreases, labor costs are increasing. Robots can replace workers, which greatly boosts productivity. Robots don’t claim overtime or demand pensions when they retire, either. The country is hoping to install one million industrial robots throughout the country by 2025.

RobotWorx is a certified integrator of Fanuc industrial robots. If you are looking to automate your production line or need an upgrade, contact us today online or at 877-762-6881.