Taking Care of the Heavy Stuff – The FANUC CR-35iA 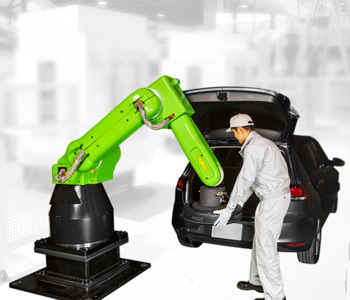 Human workers have been working with robots for years, but there is usually a barrier between them when the robot is performing its applications. FANUC decided to give workers a chance to improve their teamwork with the robots, introducing the FANUC CR-35iA, one of the first collaborative industrial robots on the market.

A collaborative robot is a robot that is equipped with sensors that allows it to stop when it comes into the vicinity of a human worker, protecting the worker from harm, and cutting down on the need of safety fencing and other barriers. While FANUC is only one of the companies delving into this new collaborative robotic technology, they have produced the first heavy lifting collaborative robot. The CR35iA has the ability to lift up to 35kg, making it the strongest collaborative robot in the industry.

The FANUC CR-35iA can collaborate with workers on a variety of repetitive applications for a wide range of industries, including the automotive, packaging, distribution, and metalworking industries, according to FANUC. The robot is also equipped with FANUC vision sensors and 3D area sensors to make it more accurate and effective during operation.

As mentioned above, one of the greatest things about the CR-35iA is the ability for it to work hand in hand with human workers, without needing fencing. Not only is the robot outfitted with sensors to stop operation, they also have a soft cover over their metal shell. This means that even if a robot comes in contact with a human, the impact force will be reduced, protecting the human worker from serious injury.

Just like other robots in the FANUC robot line, this robot also has a high level of reliability and durability, giving manufacturers the same quality they expect from the FANUC name.

Are you interested in learning more about the CR-35iA or other robots in the FANUC collaborative line? Then you should give RobotWorx a call! RobotWorx, a certified integrator for FANUC Robotics, has members of our sales team waiting to help you find the right robot for your facility.