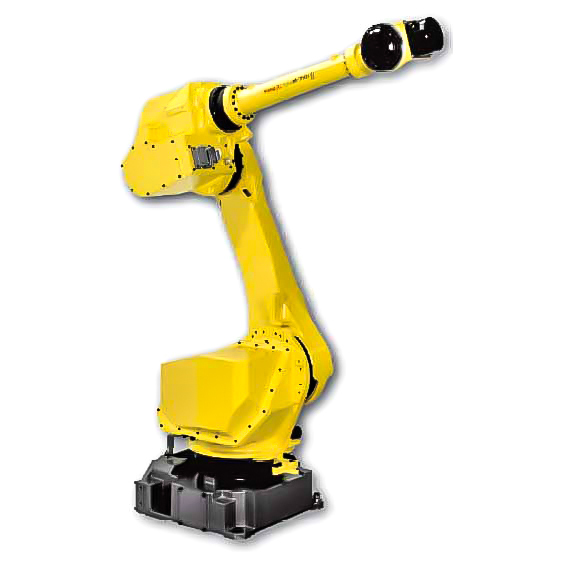 With 6-axes of efficient performance and strength, the FANUC M-710iC robot series is one you want to consider incorporating onto your production line. Whatever your needs may be, you can be sure that they will be met with a robot from the M-710iC series. With an optional Severe Dust and Liquid Protection option, giving you the ability to use these robots in the harshest of environments, there will be no job left behind. Here you will be able to see the wide range of models in the M-710iC series.

FANUC M-710iC Top Loader Series: The FANUC M-710iC/T series combines the advantages of a linear gantry with the versatility of a FANUC robot arm. The M710iC/T robotic gantry system has a large, scale-able work envelope while maintaining minimal floorspace requirements. Both M 710iC/T models are available with standard rail lengths of 7.2 to 46.2 m, but can also be custom-ordered with any size rails to adapt very easily to existing plant layouts.

The M-710iC/T robots are engineered for fast speeds, reliability, precision, and user-friendly setup as they can set up multiple vertical and/or horizontal machines. The robots in this series can improve machine productivity by 30%! This series of robots exceeds at medium-heavy material handling and machine tending, but can also perform post-processing operations. This series features two model options (50kg and 70kg) that are six-axes, modular construction, and electric servo-driven articulated gantry robot designs.

If you are looking for any of these new or used robots from the FANUC M-710iC series, then you have come to the right place. RobotWorx experts work to listen to your precise needs and then find the perfect solution for you. They also work hard putting each used M-710iC through an intense reconditioning process, bringing it back to like-new condition. Furthermore, every new and refurbished M710iC purchased through RobotWorx comes with the RobotWorx Value Package. Whether you decide on a new or used M-710iC robot, you won't regret the integration to your production line. Contact RobotWorx to start your integration process today; experts can be reached online or at 740-251-4312.