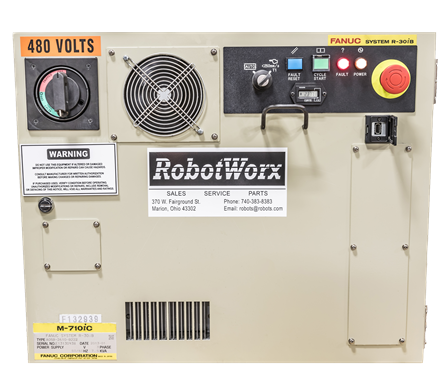 The Fanuc R30iB teach pendant is one of the newest teach pendant models that Fanuc has to offer. It is gaining acceptance in the robotic industry as a teach pendant that has simple operation while being economical, fast and efficient.

The R-30iB teach pendant, part number A05B-2518-C302, is popular because one of the focal points when designing this pendant was user-friendliness. While the iPendant Touch is recognizable to anyone knowledgeable of the Fanuc teach pendants of old because of the ergonomic design and large color touch screen, it also has additional function keys, along with a help key, which should contribute highly to the ease of use for the equipment, according to the Fanuc website.

The new Fanuc R30iB A05B2518C302 iPendant also has function keys for controlling the seventh and eight axes, as well having the option of displaying one window on the monitor, or having two displayed side by side, which improves the functionality of the multi-tasking feature.

Another improvement that comes with the A05B 2518 C302 pendant is the displaying of 3D graphics on the monitor, which simplifies the program steps for the operator in a way that two dimensions cannot. These isometric views are only available in the R-30iB. The interactions between the operator and the teach pendant are also secured, to help with any outside interaction.

Along with all these benefits, the R30iB iPendant also conserves energy – more than 10 percent more than its predecessor. So, it is not only a friend to users, but also a friend to the environment.

While Fanuc will continue to innovate and expand their teach pendant line, for now that Fanuc R 30iB is a pretty good teach pendant to have.

For more information about the Fanuc R30iB teach pendant, contact RobotWorx today online or at 877-762-6881.