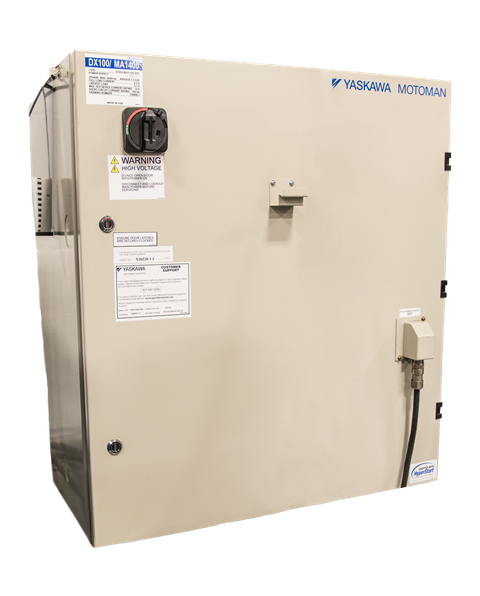 Every so often, technology has a bump that accelerates the speed at which it changes. In terms for Motoman teach pendants, that bump was the DX100.

Unlike those that came before it, the DX100 teach pendant controls up to 8 robots (72 axes). This is double what the earlier model in the lineup could do, allowing the manufacturer to save money by purchasing less equipment to do the same task.

This energy-saving teach pendant had faster processing speeds than earlier models, advanced robot arm controls for smoother motion and quicker I/O responses. While still retaining the Windows CE operating system, the Motoman DX-100 had a new color touch screen. It also touted a multi-window display capability and a unique navigation cursor that allowed for further ease of use by reducing training by 30 percent.

With the DX 100 teach pendant, there was also a sense of freedom that the operator did not have previously. Since all the operator controls are located on the DX-100 pendant, the controller cabinet was able to be located remotely.

The I/O software suite contained within the Motoman DX 100 teach pendant includes important PLC and human machine interface pendant displays and an editor that offers effective system level control at the pendant. By eliminating the need for separate PLC and HMI, the DX-100 teach pendant is significantly higher on the scale than the models that came before it.

For more information on the Motoman DX100 controller, contact RobotWorx today online or at 877-762-6881.