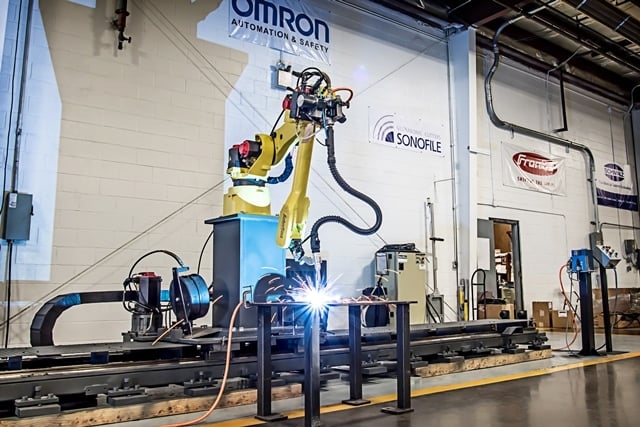 In today's technology driven world, robots are playing a major role in manufacturing with about half of those being used for welding applications. Many of those welding robots are being used in the automotive industry. Over the past 30 years automotive welding robots have been busy changing the industry. They have made automotive assembly lines faster while being safer, cost effective, and efficient. These are the main reasons why automotive robots have become paramount in changing the car industry.

Automotive robots have made factories safer because they eliminate the chance of human errors causing accidents. An automotive robot can also work in dangerous conditions as they can withstand heat, chemicals, and can come into contact with structures and parts. Being able to perform dangerous jobs has helped protect not only workers but also future consumers because robots can perform crash tests that evaluate the safety of the vehicles being manufactured. Crash tests along with many other jobs in the automotive industry would be too risky for humans to complete.

Many automobile manufacturers have been able to save millions of dollars by doubling or tripling their production time with automotive robots. Robots are capable of working 24 hours a day because they do not require breaks, sick days, etc. Many companies are also saving money with automotive welding robots because they do not need a salary or benefits. These factors out weigh the costs of occasional maintenance and repairs making robots the cheaper option compared to humans.

Another way automotive robots have changed the industry is by meeting industry expectations. Robots used in the auto industry can complete not just one task but a variety of tasks such as painting, welding, finishing, and many more. They are capable of being programmed to perform intricate jobs like welding. New industry standards call for lighter cars, but with this comes the need for tighter welding. This can only be accomplished through robots to ensure there is no rattling (another industry standard) and that the vehicle is safe. Robotic welding is key in producing new, advanced, and high quality cars. As industry repeatability specifications become more precise, robots are meeting them at faster speeds making them more efficient than humans.

The top robot models used by automotive manufacturers include the Motoman UP130, UP6, and UP20. Other popular industry robots come from the Fanuc R-2000 series and the ARC Mate series. RobotWorx is proud to carry all of these units. For more information, contact us online or at 877-762-6881.