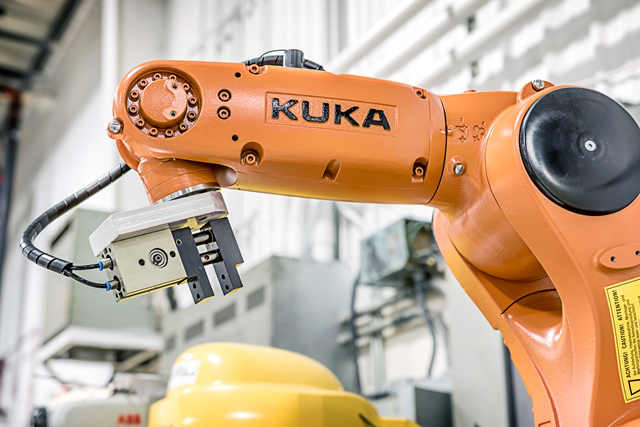 A group of German artists called Robotlab have programmed a KUKA robot to write the entire Bible. The Bios [Bible] project demonstrates the dexterity and precision of today's industrial robots.

Using a pen for EOAT, this robot scribe is writing in a calligraphy version of a 15th century German font known as Schwabacher. The result is a Martin Luther-period Bible with both Old and New Testaments - written on a long scroll of paper.

The three artists that make up Robotlab believe in exhibits with robots that do the unexpected. "We try to create an experimental forum in which the public has the opportunity to interact with robots," the Robotlab website said. While there are nearly a million robots in the world, people rarely have any firsthand experience with them. Robotlab wants to make it possible for people to have a deeper understanding of real-life robots.

This isn't Robotlab's first project using industrial robots. The Bible-writing robot has friends. Other KUKA robots have been used by Robotlab to draw portraits and profiles of individual people - using video camera technology to capture data. The "Empathizer" robot project included robots that moved in response to imputed brain voltages - creating a unique connection between human and robot.

The "Well-tempered Robot" was an exhibit in 2005 where a robot became a musical instrument - generating sounds with every movement. Visitors controlled the musical robot with an interface. Other performances have included KUKA KR15/2 robots that dance and DJ robots that produce new sounds from vinyl records.

Robotlab's initial exhibit in 2000 was entitled "Aesthetics and Power." For this project, the artists placed a moving KUKA KR 125 in the foyer of the Center of Art and Media Karlsruhe.

For more Robotlab project information, go to www.robotlab.de. For more information about RobotWorx, Contact representatives online or at 740-251-4312.