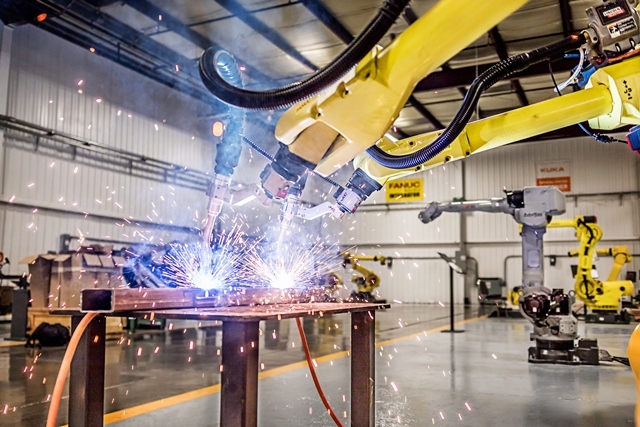 Instead of making a robot that is dual-armed and styled after a human, like the material handling Motoman DIA series, the Fanuc robots separate and programmed to work together using DualARM controls while performing applications.

Basically, a robot from the Fanuc R series works in the foreground of the system, transferring parts to a load zone. Then, a worker signals the production to start, and an ARC Mate robot works with the R series robot in a dual-armed fashion to simulate the welding path.

The use of these robots together as a dual-armed robot arc welder brings many advantages to the table for manufacturers. The R series robot has a slim design, which allows manufacturers to decrease the size needed for their automation integration. Similarly, the ARC Mate robot has a compact design. This robot also brings efficiency, speed and an increase in productivity to the line when welding a variety of parts.

These robots perform dual-armed arc welding that cuts down on production time for manufacturers, as mentioned above, and that time savings also saves money. These robots can operate together without needing a break or time off, which means they could basically run 24 hours a day, 365 days a year.

RobotWorx, a certified integrator for Fanuc Robotics, has access to the robots in the R and ARC Mate series. We are able to build systems, like the dual-armed arc welding robotic system mentioned above, or any other welding system to meet your facility’s needs.