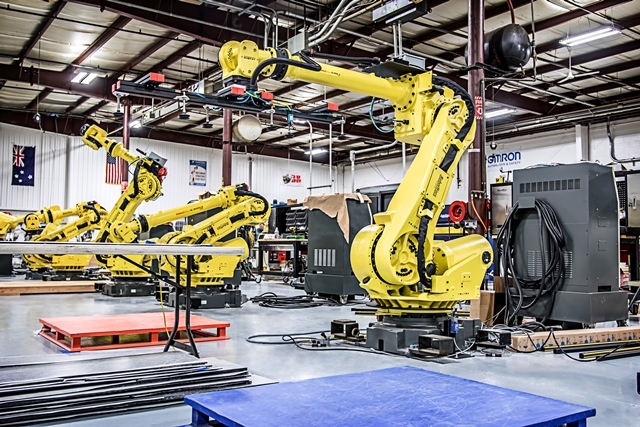 When people speak of industrial robots today, they are usually talking about articulated robots. These are the robots that are most commonly in use in factories worldwide. There are many different companies that produce articulated robots, including Fanuc, Motoman, KUKA, Universal Robots, and ABB robotics companies.

Articulated robotic systems usually have four to six axes, but they can have up to 10. These robots have more degrees of freedom than any other robots on the market, which gives the manufacturer more versatility and makes them more appealing. An articulated robot can be used for dozens of different welding, material handling, dispensing and material removal applications.

So, why choose an articulated robot? Well, that is pretty simple. An articulated robot, like the Fanuc R-2000iA, is a robot that can be used for several different applications, as mentioned above, and has a large work envelope. These robots are able to improve a company’s productivity through improved speed and accuracy, which also improves the quality of the product being produced. Also, because of their popularity and their longevity, articulated robot systems are dropping in price, making them more affordable than ever before for other markets.

If you are interested in integrating an articulated robot system into your facility, RobotWorx is the right place to call. RobotWorx provides solutions from several different robot companies, including Fanuc, ABB, KUKA, Universal Robots, and Motoman. Our staff will work with you to help you design, build and customize your perfect articulated robotic system, one that will fit not only your application, but also your budget and your facility. Our staff is dedicated to ensuring that our customers are satisfied with their purchase and return when they have new automation projects.