Electronics – we all use them. As technology advances, our computers, phones, etc. get smaller and smaller, and so do their components. That is why assembly robots are so important to the manufacturing of electronics like computers, cellphones and medical devices.

Assembly robotics are used often in electronics manufacturing because they can handle the unique conditions involved in the application. Parts to these modern electronics can be small and easily bent. Robotic assembly can adapt to the tolerance inconsistencies, easily locating and manipulating these pieces as needed.

One robot often used in electronic assembly is the Fanuc M-1iA. This robot can pick up very small parts that weigh less than 0.5kg and has a 0.02mm repeatability. This small tabletop assembly robot can work in tighter spaces and takes up very little room. 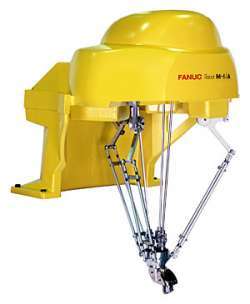 While a larger robot may not be suitable for small part assembly because of the sheer size and workspace needed, smaller electronics assembly robots, like the M-1iA, has a workspace of approximately 8 inches.

Electronics assembly robotics decrease cycle times for assembly of the inner workings of many electronics like motherboards. With the decrease in assembly time, these robots are increasing productivity in many electronics manufacturing facilities, which gets these technologically advanced items out to the public sooner, rather than later.

The introduction of assembly robotic systems to the electronics industry has also driven down prices of the end products for consumers. Manufacturers are able to save money on labor and production costs, and they pass those savings along to their customers.

RobotWorx, an integrator of Fanuc, Yaskawa Motoman, ABB, KUKA and Universal Robots, has several small part assembly robots available for customization and purchase. RobotWorx will help you to find the right assembly robot, controller, end-of-arm-tooling and safety package for your application.

For more information on small parts assembly and purchasing a new or refurbished an assembly robot model with RobotWorx, contact us today at 877-762-6881.