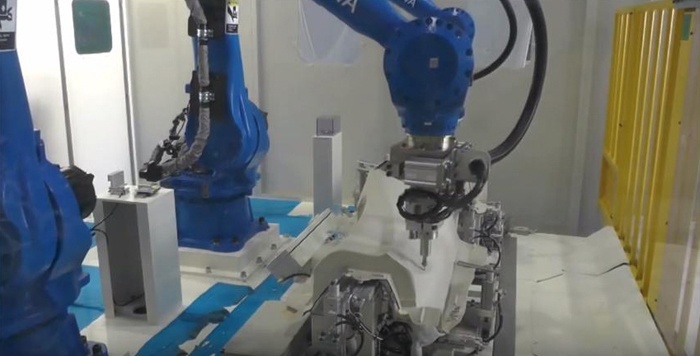 Waterjet cutting robots are a great way to cut production costs. These robots easily remove material with precision and can handle impeccable speeds. Using a high-pressure jet of water to cut through soft materials like rubber and food. Sometimes abrasives are added to the waterjet stream to cut harder materials like metal and granite.

Though the method of waterjet cutting has been around since the 1800s when high pressured water was used to erode rock during hydraulic mining, it did not find its way into the industrial world until the 1930s, where it was used for paper cutting. It wasn’t until years later that robotics were introduced to the equation and the pressure was amped up for faster cutting abilities.

Waterjet cutting is used today because it speeds up productivity on the line. Improving throughput cuts production costs for the manufacturer while ramping up revenue. Waste is also reduced due to consistent and precise cutting, extra material is eliminated and less room for error with industrial robots.

Among the forms of robot cutting systems like laser and plasma cutting, robotic waterjet cutting is the fastest and most flexible method of cutting. It is commonly used for most plastics, foam, rubber, leather, composites, stone, tile, metals, food and paper. However, it is not an effective application for cutting glass, diamonds or some ceramics.

Waterjet robots can easily be programmed to adjust to uneven surfaces and thickness, along with odd-shaped products. This form of cutting is used in several industries, including the automotive, mining and aerospace industry.

RobotWorx, a certified integrator for FANUC, Motoman, ABB, and KUKA robots, is capable of integrating waterjet cutting systems. Our highly skilled team of engineers, salesmen and designers will work with you to find the right industrial robot for you.

For more information about cutting with waterjet robotics, contact RobotWorx today online or call us at 740-251-4312.

Automation for the General Industry