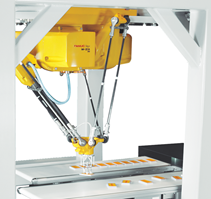 Parallel robots, as opposed to serial robots, have several simple lightweight arms between the fixed base and move-able part. Each arm is controlled by its own motor and its movements are coordinated by a computer. The arms are placed as close as possible to the robot base, and the independent linkages work together independently of the position of other linkages. This allows for increased stability and arm rigidity with faster cycle times than serial automation.

The aerospace industry is utilizing parallel robots, specifically Tricept machines. The T9000 is the most recently released model, and the T605 and T805 are also adequate for aerospace operations. All models have been used for structural machining aerospace, as well as other operations such as deburring, welding, and part assembly. Tricept is a 5 or 6 DOF hybrid PKM controlled robot. Its three actuators are exactly equal, and it has a direct measuring system. The Tricept promotes redundancy and flexibility, and helps save time between operations.

Parallel robots can be used in a variety of industries. The Adept Quattro s650H parallel robot is designed for high-speed applications in material handling, packaging, and assembly. At 240 cycles per minute, it is the industry’s fastest pick-and-place robot. It features a four-arm design and advanced control algorithms. Its large work envelope encourages high throughput and smooth motion.

Delta robots are another type of parallel robot, with three actuators controlling all three translational degrees of freedom of the mobile platform. It is usually used as a pick-and-place robot. SIG Robotics offers the XR Delta.

Other popular parallel robots are the NanoStage Six from Adept Robotics, SurgiScope from Elekta IGS, and Quickstep from Krause & Mauser Group.

RobotWorx can help any company decide and integrate a parallel robotic setup into their factory floor. If you are interested in learning more on how to choose the right robots and workcell, contact RobotWorx online or at 740-251-4312.