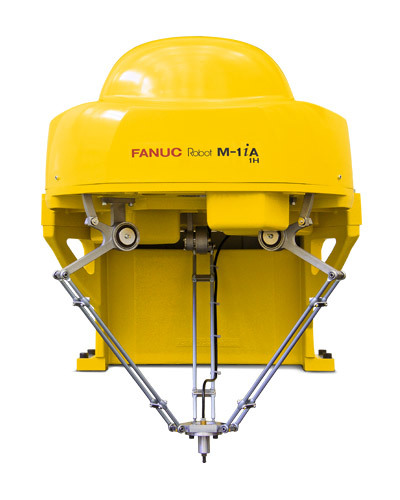 FANUC, a leader in robotics for decades, supplies manufacturers worldwide with a plethora of models that weld, handle material and remove material. One specific area where FANUC has shined is the picking application. With FANUC’s line of “Spider,” or parallel-linked, robots, picking has never been easier for companies.

Some of these FANUC robotic pickers will be used in areas like prescription drug packaging, where picking the right kind of pill is important. While there are several picking robots available on the market, FANUC introduced something that changed the game of picking robots – their robots could see.

And these FANUC robot picking systems are not just able to see, but they are able to see in color, with the assistance of iRVision cameras and software. FANUC picking robotics have performed many tests, showing off their ability to separate candies like M&Ms, Skittles, and jelly beans by color. These robots are now equipped to pick up and sort small items by the color of their surfaces, and they don’t pick them up slowly. They speed up production to a rate that is unattainable by manual applications, saving manufacturers time and money.

With the addition of vision to FANUC robotic pickers, these systems will not only be able to sort prescriptions, but they will also be able to double-check their work, and also keep a more accurate log of their products. This gives companies a way to backtrack a bottle to see where it came from if it is damaged or spoiled.

With FANUC picking robots, as well as models from other robotics’ companies, it is believed there will be more and more automation for the picking of small, valuable things like prescription pills or micro-electronics.

RobotWorx, a certified integrator for FANUC Robotics, has several of the FANUC M-series “Spider” picking robots available for purchase or customization. These robots can be integrated alone or in groups to further automate your picking processes.

For more information about automating with FANUC robot pickers, contact RobotWorx today online or at 740-251-4312.