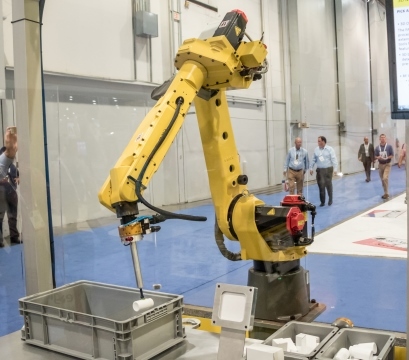 Bin picking has traditionally been a problem for manufacturers because of the unstructured environment of parts. When a pile of randomly oriented parts are stored un-ordered in bins, they need to be separated and then placed on conveyor belts that can adapt to the geometric properties of the parts. The previous 2-D nature of robots presented a challenge to do this, but intelligent vision-guided robotic systems can automate the picking process.

Layered vision was the first step for intelligent solutions for bin picking. When a 3-D representation was created, the image processing required to find key features of the products was significantly reduced. The 3-D image could be uploaded to the controller software, and then 3-D calibration could occur. The vision system and robot controller needed to be calibrated to the same global coordinate system to the specific contours of the parts to be picked. The program path could be created and then implemented.

Fraunhofer IPA approached the problem in another way: they developed algorithms to recognize objects based on analyzing 3-D data, requiring only an adjustment of the robot’s gripper for different objects. The IPA software is based on the best fit of geometric primitives (shapes like spheres or cones) in measured point clouds. Once the primitives are recognized, the object as a whole can be located.

Bin picking vision systems are even useful for entertainment: a group of students at Ohio Northern University developed a system to track an air hockey puck while the game is being played. Instead of picking the puck and placing it elsewhere, the robot was programmed to pick the puck and hit it back to the other side of the air hockey table.

Vision and intelligent systems opened the door for a new level of bin picking automation. RobotWorx supplies customers with bin picking robots from multiple robot brands. If you are interested in purchasing a robotic bin picker, contact us today online or at 877-762-6881.