Robotics on the Move – Mobile Robots 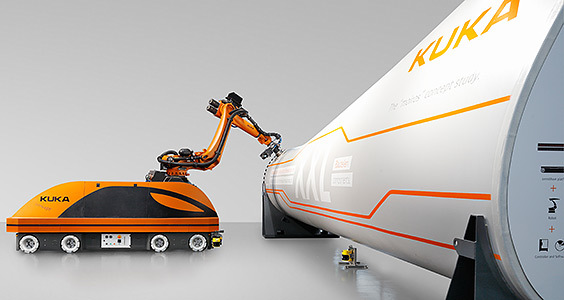 When someone brings up the idea of mobile robotics, most people probably flash to movies like The Terminator, Star Wars, or even I, Robot. However, the mobile robots that are being conceived today and in the near future are probably closer to Wall-E than C3PO. Mobile robots today are developing ways to take robots off of their shelves and mount them on automatic guided vehicles (AGVs) to help them mobilize.

What would these robots do? How would they be practical? Well, that depends on the shop. Many shops do not perform enough actions at any one station to consider automating that area. However, if one robot could move to many different stations and perform a variety of applications, then that would definitely be practical and profitable. For example, instead of having a dedicated robot at one station that would finish all of their work within a few hours of starting production, and then be useless the rest of the shift, a mobile robot mounted to an AGV could perform one application at one point in the production line, and then move to another station in the production line and perform another application.

Another advantage? Mobile robots will save manufacturers quite a bit of money in the long run, especially if they are determined to automate their processes. By investing in one robot that is able to be programmed to move from station to station, instead of buying dedicated robots for each station, the company can save the cost of one to two more robots, while still automating their process. That is a possible savings of $100,000+.

All in all, mobile robots would be a great fit for lots of different production lines, especially for smaller companies. They would save money and time, while also enhancing speed and quality.

Are you interested in learning more about robotic advancements, like mobile robots? Then you should call RobotWorx today online or at 740-251-4312.