Robots Can Produce Medical Parts Too 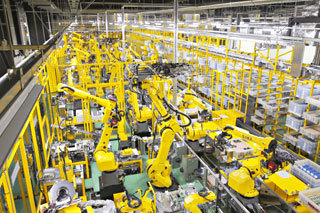 In comparison to the automotive, aerospace, and electronics industries, the medical-manufacturing industry has not taken advantage of robotic automation technologies at a high rate in the past. However, decreasing costs and recent advancements in robotics are encouraging the medical device sector to use automated manufacturing in many medical device operations like assembly, dispensing, inspection, machine tending, material handling, and packaging.

The ease in which robots can now be programmed since modern controllers are PC-based is a big factor in increasing automation. Further, designers can simulate robotic lines before they perform their task in real life, reducing risks and lowering costs. Current systems can also conform to medical requirements for tracking software.

Robots can perform accurate and precise movements needed for small or complex parts. They can assemble, inspect, transfer, and package medical parts like stents, shunts, and catheters. Robots ensure reliability and repeatability, which validates many people’s fears about a non-human handling their medical care. The cost of human labor is also decreased. One operation uses cameras to locate and pick stent wires. The cameras located the tips of the wires, often bent, and the robots knew exactly where to pick them up. Twenty-two people were used for this process previously, and with the aid of robots, only three people are now necessary.

Many medical devices require document-process control. This is simplified with automation since robots use real time to capture part dimensions. Hardware or software can then be used to interpret the data.

ESS Technologies specializes in packaging medical devices. A 3D model is imported into Fanuc’s RoboGuide software, as well as other drawings and information from suppliers. Next, frames tell the robot its location and the packaging equipment’s location. Then, programming is as simple as using a teaching pendant to show the robot where to go to perform the packaging task.

In one ESS Technologies operation, robots assembled and packaged a medical device, placed it on a blister card, loaded multiple cards into a carton, then into a case, and finally onto a pallet. The robots picked a part from a conveyor aided by end-of-arm tooling with a forced sensor allowing the robot to realize when it has properly grasped the product. Seven robots were used in the operation, mainly LR-Mate 6-axis models.

Fanuc’s robots are equipped with vision software that helps the robot locate parts in randomly oriented piles in trays or conveyors. 2D Vision software employs one camera, and 3D Vision adds cameras as needed. The M-410iB model combined with ESS Technologies equipment is able to pack pharmaceutical bottles and pouches into cartons. The LR Mate 00iC loads syringes into trays. The M-1iA Robot is often used in medical device assembly because it can handle difficult parts with repeatability.

Denso Robotics is a supplier of medical device-compatible robots ideal for assembling small, difficult-to-handle parts. They have a wide range of workspaces, so the operator can tailor the robot to his needs.

RobotWorx carries a wide variety of industrial robots that can be used to produce medical parts. Whether it's welding, painting or even molding, RobotWorx representatives can help you decide which medical robot would be the right choice for the most efficient part building. Contact us today online or at 877-762-6881.