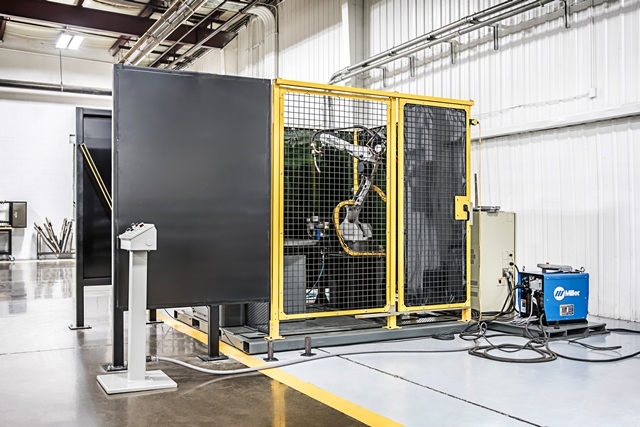 For years, the aerospace industry has researched ways to do away with riveting and the extra weight that it adds to an aircraft. This alternative may lie with six-axis friction welding robots that can weld various thicknesses with good seam quality.

According to an article from SAE International, by using six-axis friction robotic welders, as opposed to automated riveters, the aerospace industry can expect a 20 percent decrease in application time, as well as a decrease in costs.

Granted, even with machine friction welding, manufacturers do have a choice between a friction welding machine and a robot friction welder with six axes. However, in the case of the aerospace industry, and their more complex part curvatures, the six-axis friction robotic welding system may be the only way to go.

The six-axis friction welding robot can produce all the force needed to complete the application. The robot also has maximum flexibility over other options, with the capability to weld seams on three dimensional objects. This means that the robot’s six degrees of freedom allow it to freely weld more than just linear welds. It can also weld the curvatures of fuselages and other aircraft parts that are more complex in shape and size.

RobotWorx, a certified integrator for Fanuc, Motoman, ABB, Universal Robots, and KUKA robotics, specializes in welding applications for dozens of industries all over the North American continent. Whether you are looking for a six-axis robot for friction welding, or some other welding application, RobotWorx has the model perfectly suited for your process. Our highly-skilled staff works directly with customers to ensure the welding robot system or workcell is designed to their exact specifications. The company also provides in-house training on the robot at their Marion, Ohio facility before it is integrated into the customer’s facility.

For more information on automating your friction welding application with a six-axis robot from RobotWorx, contact us today online or at 877-762-6881.