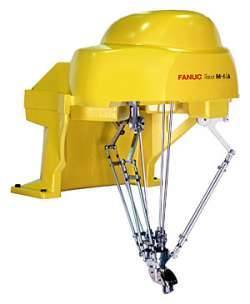 Fanuc Robotics has done it once again! Fanuc’s series of Spider robots how includes a new model, the M-1iA/0.5SL robot. This robot is similar to the other M-1iA robots, but it does have some advantages over other similar robots, including an increased reach.

The Fanuc M1iA/0.5SL is a spider robot with a longer reach, as mentioned above. Unlike the M-1iA/0.5S, which has the same 0.5kg payload capacity and a 280mm reach, this model boasts a 420mm reach – one of the longer reaching delta-style robots in the industry today. With its four axes, the M1iA-0.5SL is great for many different applications, including assembly, picking, packaging and part transfer.

The small grippers on the ends of the M-1iA/0.5 SL from Fanuc are tailor made for things like small parts assembly, especially in the electronics industry. When you’re dealing with the very small components of a cell phone, tablet or even a laptop computer, it is a lot easier to use a small parts assembly robot, instead of human hands. Human hands can shake and cause worker errors that can completely destroy the functionality of the device. This is not an issue when using a robot like the M1iA/0.5SL from Fanuc Robotics. Companies are able to decrease worker errors and increase the quality of their products in one fell swoop.

Are you interested in learning more about the M1iA/0.5SL, or other products in the Fanuc line? If so, then you should call RobotWorx, a certified integrator for Fanuc Robotics. Our staff will work with you to find you the best deal available on a new or used robotic system.