The Modernization of Industry Through Automation 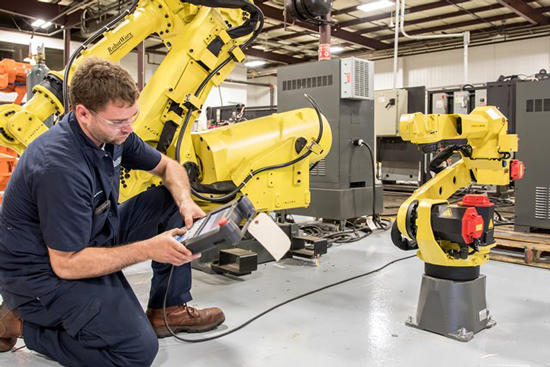 Factories and other industries have been around for over 150 years, and people were creating their own goods in either small shops or at home long before that. While making things by hand has been the tradition, making things by machine is the modern trend. Industrial automation, the introduction of robots with 3+ axes of motion, into a production line has completely changed the way manufacturers think.

Automated industrial robots are attractive to manufacturers for several different reasons. The first is one of the most obvious – speed. When human workers were performing these tedious jobs, they did so at their own pace, which varied by worker. While some workers were fast and some were slower, none could match the speed of any robot in the automation industry. Not only does industrial automation speed up the production process, but it also gives a consistency to the speed and the time it takes to finish a cycle.

Another reason that manufacturers are lured to industrial automation is the accuracy. All robotic applications depend highly upon accuracy to be functional. The precision of an automated industrial system is unmatched by human workers as well. Robots have a repeatability level that is second to none. A robot can hit the same spot a work piece 500 times in a row without missing. The same cannot be said for a human worker in the same job.

Overall, industrial automation contributes speed and accuracy to a workplace, along with so many other things. It gives manufacturers back their time and money, which they can then put to good use elsewhere.

Are you interested about the possibility of integrating industrial automation into your facility? If so, then you should call RobotWorx, a leader in industrial automation and integration. RobotWorx provides solutions from several different robotics companies, including Fanuc, Motoman, KUKA, Universal Robots, and ABB. Our staff is dedicated to helping you build and customize the perfect automation system for your industry and your budget.