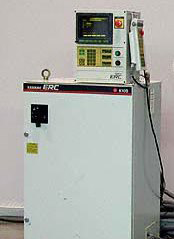 While there are many pendants out there that have been around for many years, the Motoman ERC teach pendant is one of the granddaddies of them all. This model, which looked more like a computer monitor than today’s modern teach pendant, worked with the K series robots from Motoman, which released in 1988.

The ERC pendant, part numbers JZNC-MPP20E and JZNC-MPP21E, controlled up to 12 axes, more than any other teach pendant at that time. The Motoman ERC also had seam tracking and multi-layer functions, making external sensors and tracking devices obsolete.

The JZNCMPP20E teach pendant weighed 0.9kg, heavier than later models, and was equipped with a smaller display than the later handheld models, and could display only 12 characters at a time. The ERC JZNCMPP21E also had a three-position deadman’s handle as a safety measure.

As mentioned above, the Motoman ERC JZNC MPP20E was a step in the right direction for Motoman. While it was the grandfather of the MRC, and later models like the XRC and beyond, it was definitely an early model that was groundbreaking for its time.

RobotWorx, a certified integrator for Motoman Robotics, has access to parts for the ERC robot controller and pendant. If you are in need of spare parts, contact RobotWorx today online or at 740-251-4312.