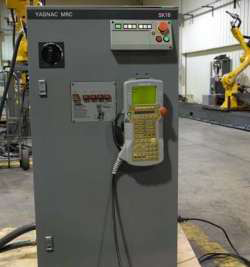 Every history has to start somewhere. For Motoman Robotics, the history of their teach pendants begins with the Motoman MRC teach pendant. While it is not the first teach pendant Motoman had, it was the first in many areas.

Introduced in 1994, the MRC teach pendant, part numbers JZNC-MPP10E, JZNC-MPP20E, and JZNC-MPP22E, was ahead of its time. It was the first robot teach pendant that could synchronize two robots from one pendant. Made for the SK series, the JZNCMPP10E MRC Motoman teach pendant was able to help increase the robot’s workload by 300 percent. It could also control more axes than the previous teach pendant, the Motoman ERC.

Along with those features, the Motoman MRC JZNCMPP20E teach pendant also introduced new functions to the robot, including multi-tasking, servo-float and S-move. Another interesting improvement was the ability to edit robot jobs through an actual PC, something unheard of before.

All in all, the Motoman JZNCMPP22E MRC teach pendant was Motoman’s push toward the future of their robotics, the first in a multitude of steps to get where they are today.

For more information about the MRC teach pendant from Motoman, contact RobotWorx today online or at 740-251-4312.