The Nitty Gritty of the Motoman SK120 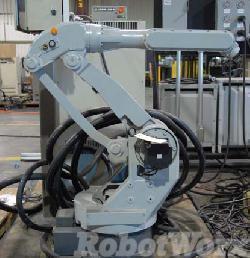 Industrial robots play a key role in the manufacturing of many, if not all, consumer goods today. We know what they make, but what are they made of? Essentially, robots, like the SK120 by Motoman, are made up of six axes. For Motoman, those six axes are the S, L, U, B, R and T axes. But, what makes those pieces of metal move together as a functional arm and wrist? That would be the wrist unit, the speed reducers, the servo motors and the internal wiring of the robot.

The wrist unit, part numbers HW91711167-A, HW9171167-B and HW9171167-1, of the Motoman SK120 robot is critical. As a robot that can be used for material handling or welding, the wrist is important because it is where the end effectors are attached, which make the job possible.

So, what makes the SK 120 from Motoman run? That would be the AC servo motors, part numbers HW9380963-A and HW9380964-A. The servomotors work with an amplifier that sends and receives feedback from different parts of the robot. This helps the motors decide the rate that the robot should move.

So, thinking about buying an SK120 from Motoman? Or do you have an SK-120 around your shop that needs some TLC and extra parts? Look no further than RobotWorx, a robotic integrator for Motoman Robotics. RobotWorx supplies Motoman robots and parts to industries all over the United States and other parts of the world.

For more information about ordering parts or a robot system from RobotWorx, contact us today at 877-762-6881 or reach representatives online.