A Closer Look at the NBC 'Knight Rider' Robots 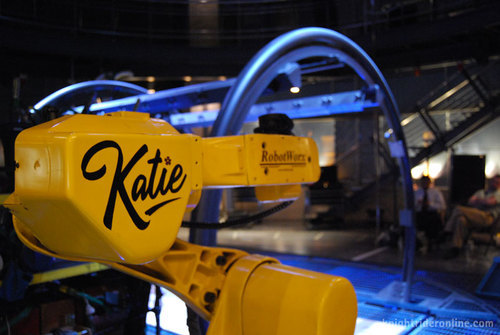 Two reconditioned RobotWorx robots act as intelligent grease monkeys in KITT's high-tech garage. Named Katie and Lisa by NBC, the robots scan KITT for damages, and even interact with the human actors around them.

Want to learn more about Katie and Lisa? Here's the scoop.

What Kind of Robots Are They?
The Knight Rider robots are FANUC ARC Mate 100i models. They are versatile, standard industrial robots with 6 axes (joints) of motion. They can lift up to 6kg, reach as far as1373mm, and install anywhere - floor, wall, upside-down, and at an angle.

Fanuc ARC Mate 100i robots are known for their speed, accuracy, and compact build. Acting is definitely not a normal line of work for these robots. Instead, they perform a variety of jobs, including arc welding and material handling, often in factory settings. See them in action: ARC Mate 100i robots welding.

Getting the Knight Rider Robots Ready:
RobotWorx' main specialty is reconditioning. The company takes used robots and fixes, cleans, and integrates them into robot systems. The Knight Rider robots received the same treatment. Before the robots shipped to a filming studio in California, a team of RobotWorx technicians made sure the robots were cleaned, reworked, tested, and repainted.

Out of Context: Industrial Robots on Film
One change had to be made before Katie and Lisa were deemed stage-ready. Each robot is powered by a controller - a large, rectangular cabinet that houses the brains of the robot.
"The controller needed to be dead silent," RobotWorx' shop manager Matt Schrift explained. "But the fans are there for a reason. They're part of the normal noise the controller makes."
The solution? A longer cable was provided so the controllers could be placed further away from the robots.

Final Step: Robot Training
Robot technician Robert Edens Jr. was responsible for training a representative from NBC's set crew at RobotWorx' Marion facility. Edens taught the NBC set technician about the robots' safety features and how to direct their movements. To simulate KITT, Edens used a box and cart.

For more information, contact RobotWorx representatives online or at 740-251-4312.