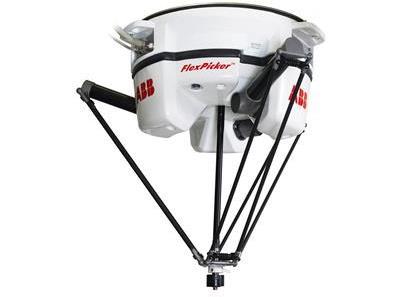 In 2015, the ABB United States Robot Factory made a commitment to complete robot arms and controllers to United States customers. It has followed through with this commitment for multiple robots and now with the IRB 360!

The outstanding motion performance ABB IRB 360 Flex Picker has been the leader in state-of-the-art high speed robotic picking and packing technology. This continued popularity led to this exciting ABB United States production announcement! Even more, the first ABB IRB 360 made in the ABB US Robot Factory was made for a United States Value Provider!

There is an IRB 360 for almost every need as it can tackle a variety of payloads up to 8 kg and reaches 800 mm-1600 mm. It provides users with quick cycle times, incredible accuracy with the integrated vision software, and outstanding motion control! Furthermore, the ABB IRB 360 can work at very high speeds in narrow and wide spaces with tight tolerances. If your production needs require a larger gripper, this robot can accommodate larger grippers allowing for efficient handling of flow wrapped products at high speeds from an indexing belt. It also has a hygienic design for the washdown applications.

The list of other US ABB Factory made robots include the IRB 2600, IRB 4600, and IRB 6700 robot arms as well as the standard and compact IRC5 controllers. Special requirements such as Foundry Plus 2, MultiMove robots, and motor packages are also available from the US Factory.

This US factory delivers robots in around four to six weeks with robot configurations that meet each customer’s specific needs.

If you are interested in an ABB IRB 360, contact RobotWorx representatives today. We are certified integrators for ABB and look forward to helping provide you with the perfect automation solution. Experts can be reached at 740-251-4312 or online.