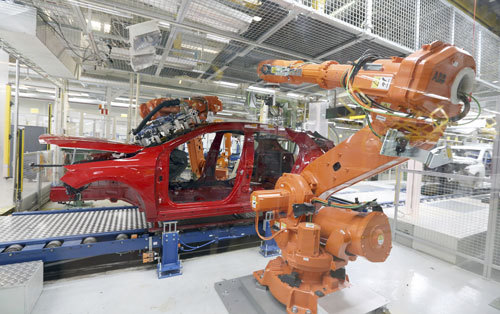 The auto industry is booming like never before. Already this year over 13 million cars have rolled off the lines in factories all over the United States. That number doesn't even include the millions of cars created around the world. How are manufacturers able to keep up with the demand of car buyers wanted new models every few years? The answer is simple: robot automation.

Automated robotic systems can be used to perform all kinds of automotive tasks on vehicle frames, fenders and underbodies, as well as other parts of the vehicle during production. While changing a line to work on a different car model used to be tedious and slowed production, automated robots today can be reset without having to be reprogrammed each time -- without stopping the line, which increases versatility and productivity for manufacturers.

In the late 1990s and early 2000s, Chrysler started robotic automation processes in their factories. Almost a decade ago, in 2004, they produced an unprecedented number of different models. They were able to do this because of their automated robotic capabilities. Different models meant different materials to be handled and moved, different sizes of materials, etc. Chrysler was able to keep up their production numbers because of their material handling automated robots.

Honda has improved their versatility as well. While Honda may be a Japanese company, there are factories right here in the U.S. producing cars every day. Honda has robots that perform tasks like spot welding and painting on vehicles, which not only increases their quality of their product and enhances their production speed, but also improves the safety levels for their workers. An automated robot can do jobs like painting and welding that produce harsh, and sometimes hazardous, fumes and conditions -- keeping human workers out of harm's way.

Ford also jumped on the robot automation train also, dumping $1 billion dollars into automating their 50+ year old factory over the last decade. They also are using re-programmable robots to increase the productivity and versatility of their line. Before the revamp of their factory, it took crews at Ford 26 weeks to refit the welding towers, and other monuments used to assemble a vehicle, to accomodate even the smallest design change.

Are you involved in the automotive or other industry? Do you feel that your industry may benefit from the flexibility that automated robotics can bring? For more information on automating your line, contact RobotWorx today online or at 740-251-4312.