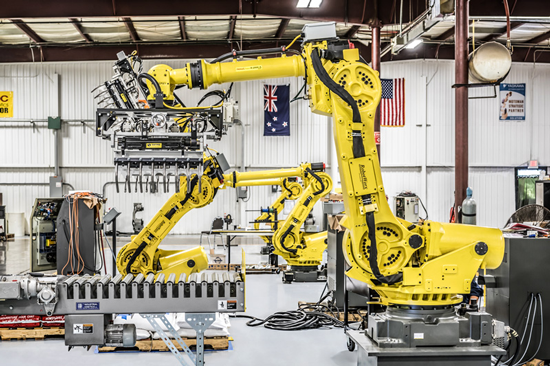 Due to regulations passed in 2011, material handling robotics now have the edge in the food and beverage industry.

In January 2011, President Barack Obama signed The Food Safety Modernization Act. This act gave the Food and Drug Administration power to regulate how food is grown, harvested and processed. This law was proposed following several outbreaks of food-related illness and tainted food during the 2000s.

Since manual applications of food handling have a higher rate of error and chance of contamination, material handling robots are being brought in so facilities can hold up to the new standards and regulations.

Not only do robots promote a more sterilized environment, they also take more precise counts during production, which leads to the ability to track a package that might be tainted back to its origins.

Food material handling robotic systems have a protection rating of IP 67, meaning that they are not only coated to withstand rusting and growth of bacteria, but they are also dust-proof. These robots are versatile enough to perform several different material handling applications, including pick and place and packaging.

There are several food-grade approved robots available through RobotWorx, an integrator of robotics from Fanuc, KUKA, ABB, Universal Robots, and Motoman.

If you are ready to start automating your food and beverage handling processes, contact the RobotWorx sales department at 877-762-6881 to begin designing your food material handling robot system.