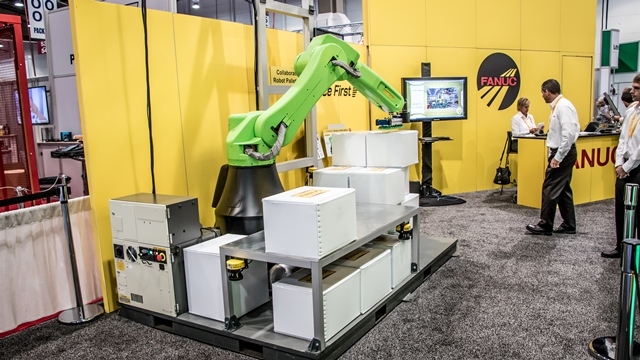 Until recently, industrial robots have been trapped behind curtains, fencing, and other barriers away from humans because of the dangers that existed during operation. Industrial robots move with a force that could injure a human worker if they entered the work space during the application process. However, many robotics manufacturers, including FANUC, KUKA, Motoman, and ABB, are taking advantage of new technologies that enable humans and robots to collaborate, doing away with the safety barriers of old.

FANUC Robotics recently introduced the CR-35iA, the first heavy lifting collaborative robot on the market. This robot is able to lift up to 35kg, while also being able to work in close proximity with workers, performing a variety of tasks for a multitude of industries. The CR-35iA is covered in a soft green shell that cuts down on the force impact when it comes into contact with a worker or other structure.

The Motoman HC10 collaborative robots have blue rubber skin to further protect humans from pinch points. They also have special technology, called Power and Force Limit that can monitor the force in each joint, as necessary. It can also immediately stop the robot if any contact is detected. Furthermore, the HC10 has incredibly simple programming called Easy Teaching Smart HUB where the user can position the robot arm and gripper on the desired path.

While robots have been assisting humans for years, KUKA Robotics took this one step further and introduced the LBR iiwa to the world. The iiwa stands for “intelligent industrial work assistant.” This KUKA robot is the first to have safe torque sensors on every axis, and it is suited for tactile solutions and simple gripper systems, according to KUKA. This lightweight robot has elevated sensory capabilities, which not only make it safer for human-robot collaboration, but also make it user-friendly with a simple robot control and fast teaching.

Touting the first truly collaborative robot, ABB unveiled YuMi, which is short for “you and me working together,” is a complete collaborative industrial experience for the consumer electronics industry. According to Robotics Today, the ABB YuMi is a human-friendly, dual-arm robot that has the ability to feel and see. YuMi’s dual arms are also covered in a soft shell to cut down on the force on contact with any other structure or worker. While YuMi was primarily designed as an assembly robot for the electronics industry, ABB is working to possibly develop its functionality for other industries as well.

Overall, the collaborative robotics movement means that humans and robots are going to be able to work together without all of the safety guards and barriers, which will improve application functionality, while also cutting down on the amount of space necessary for a robotic unit.

Are you interested in learning more about the collaborative robots listed above, or any of the traditional industrial robots available from the companies in this article? Then you should contact RobotWorx as we integrate a variety of robots for FANUC, Motoman, KUKA and ABB. Our staff will work with you to help you design and build the best robotic system for you and your facility.