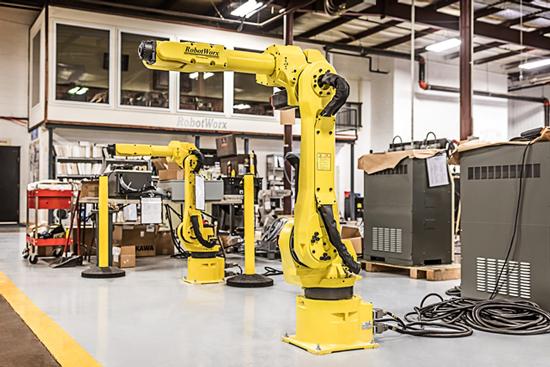 Human arms have been putting together items in factories for years. Now, new arms, industrial robotic arms, are working in that same respect, at a faster, more accurate rate.

In the manufacturing world, one of the most common robots is the robotic arm. This metal arm, usually made up of 4-6 joints, can be used for several manufacturing applications, including welding, material handling and material removal.

That is where the similarities end though. Industrial robotic arms move much faster than human arms and, without the proper safety measures, can be dangerous. Robotic arms usually have some form of safety package or sensors available to ensure the safety of human workers.

An industrial robot arm not only increases the speed of the manufacturing process, but also the accuracy and precision. These robotic arms cut down on worker error and labor costs.

The industrial robotic arm, which is usually made of steel or cast iron is built from the base up, ending with the wrist and whatever end effector is needed to perform the arm’s chosen task. A robotic controller rotates motors that are attached to each joint. Some of the larger arms, used to lift heavy payloads, are run by hydraulic and pneumatic means.

The arm’s job moves the end effector from place to place – picking up, putting down, taking off or welding a part or the entire work piece. These robotic arms can be programmed to do several different jobs or one specific job, depending on the manufacturer’s specifications and needs.

While these robotic arms are used to lift huge items, palletize heavy loads, and weld entire vehicles together, they are also used for the little things. The precision of a robotic arm can put together even the tiniest motherboard or microchip.

These metal marvels will continue to operate in manufacturing for years to come – arms lifting and moving progress along until the next lightning fast innovation is introduced.

RobotWorx, a certified integrator for Fanuc, KUKA, ABB, Universal Robots, and Motoman robotic arms, has an entire warehouse full of industrial robot arms waiting for customization and integration. Whether you need help with your welding, material handling or material removal automation, RobotWorx has the proper robot arm or system for your situation.

For more information about industrial robotic arms, contact RobotWorx today online or at 877-762-6881.