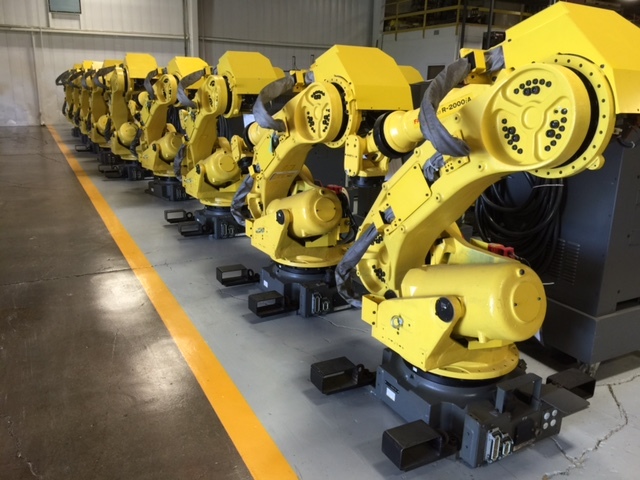 Fanuc Robotics, a leading robotics company, was founded in 1972 and has been cranking out new and innovative robot models ever since.

Fanuc, like other robotics companies in the industry, has robots for many different industries, like the aerospace, alternative energy, automotive, consumer goods, food and beverage and plastics industries, along with a number of others.

This company’s robots have several different payload capabilities from 0.5kg to 1,350kg. Some of the more popular models available through Fanuc are the ARC Mate 100iC, the LR Mate 200iC, the M-1iA, the M-710iC and the R-2000iB. These robots cover applications from welding to material handling to material removal.

The ARC Mate 100iC is perfectly suited for welding and cutting applications. It moves over 15 percent quicker than most robots in its class. The robotic company offers this robot in longer and shorter arm versions to meet the customer’s needs.

For the super heavy payloads, Fanuc Robotics offers the M-2000iA, which has a wrist capacity of up to 1350kg. There are two models available, one that offers that super-heavy payload capacity, while the other sacrifices the payload for an extra-long reach.

Fanuc is one of the many robotics companies that works in partnership with RobotWorx, an integrator of new and refurbished robotic arms and systems. RobotWorx offers customers customized Fanuc robots and workcells that meet their specifications.

For more information about Fanuc robots available through RobotWorx, contact us today online or at 877-762-6881.