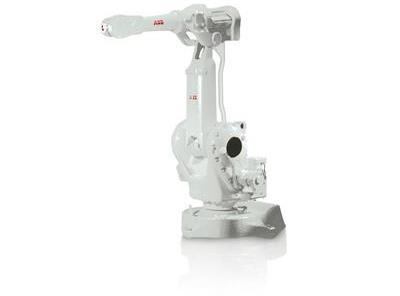 ABB’s IRB 120 robot is the company’s smallest robot. It is ideal for assembly applications and material handling. It is compact and lightweight, providing superior control and path accuracy.

It has been used in the electronics industry to assemble a digital camera. The system can locate randomly placed parts using vision technology and assemble the parts into the camera with positional repeatability of .01mm.

The 6-axis IRB 120 also came to the aid of Vivabox, a packaging producer. The system can handle 1200 trays of boxes an hour and now runs 16 hours a day, saving Vivabox significantly in operational costs.

The company Elektro-Praga needed a new production line for its child-proof dual-plug electrical safety sockets. 3 ABB robots took over the job. The IRB 140 is small, fast, accurate, and powerful with one of the fastest cycle times of any articulated robot. The robot system is concentrating on the dual plug sockets for now, but soon will be used for other variants.

ABB is continually striving to meet the future needs of its customers. ABB’s customer base began frequently requesting that ABB develop robotic solutions for manufacturing environments in which humans and robots could work collaboratively. New and innovative solutions were necessary for small part assembly operations.

In response, ABB created a dual-arm concept robot. It is a 14-axis robot with a flexible gripper, camera-based part location, and all the features included with the IRC5 robot controller. The robot is compact and can fit into human workspaces alongside humans. With its human-like arms and body, it complements human labor with agile motion. Productivity and flexibility are ensured with the padded dual arms.

RobotWare Assembly Force Control is an application option in ABB’s assembly software programs. It is ideal for the use of robots for tasks that need touch sensing, like assembly, fixturing, and product testing. Robot movements adapt to the feedback from a force sensor so the robot can automatically search for a location and assemble parts using intelligent force/torque motion without risking part damage. RobotWare Assembly FC robotizes assembly tasks while handling parts like a human worker, saving installation and programming costs.

RobotWorx offers a variety of ABB assembly robots that can be purchased at a lower price. We have new and used models available for integration. For more information, call us at 877-762-6881.