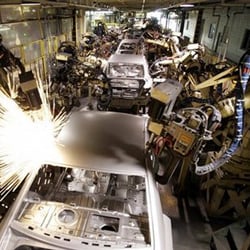 When people in Central Ohio think of car manufacturing, their first thought may go to the small town of Marysville, Ohio where there is a large Honda America manufacturing plant. The Honda plant in Marysville is responsible for building the Honda Accord and the Acura TL. The company came to Marysville in 1982 to specifically build the Honda Accord, which is now more than 30 years old and has had had eight generations built at the Marysville plant.

Companies like Honda are some of the largest purchasers of industrial robotics. Robots have been used in the automotive industry for decades. There are several different applications that go into building a car, and robots can do almost all of them.

Robots can be used to weld together the frames of automobiles. By investing in robotic welders, car manufacturers save money by decreasing production time. A robot welder do the job of four manual welders and can complete the process more quickly. Robotic welding is also more accurate and makes for stronger welds, which improves the frame of the vehicle.

Welding isn’t the only application that car manufacturers can use robots for though. Robots are also used for the actual assembly of the car itself. Robots can drill holes, shoot screws, put on doors, as well as sealing and bonding glass and plastic elements to the frame. By using robots for all of these applications, manufacturers are speeding up their overall production, as well as improving the accuracy of the applications and the safety level of the product.

Manufacturers in Marysville, Ohio that are looking for robot systems or parts are able to find them less than an hour north in Marion, Ohio at RobotWorx. RobotWorx is a certified integrator for Fanuc, ABB, Motoman, Universal Robots, and KUKA robotics. Our extensive list of partners gives us access to several hundred new and used robot models for your facility.