Robots and the Job Market 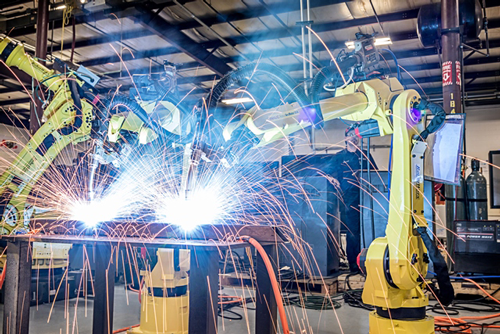 In the first half of the 20th century, humans saw robots taking over the world in science fiction literature and B-movies. Then, toward the end of the 20th century, as industrial robots began to rise in popularity, humans were concerned that they would take over the job market. However, industrial robots are not going to “take over” all of the jobs, as human workers fear. Instead, they are going to take over less desirable jobs for workers, as well as filling in the gaps where no skilled workers are available for hire.

In the 1980s, industrial robots began to come on the scene more heavily, especially in manufacturing markets. These robots took over jobs like packaging and palletizing, which could be tedious and dull for workers. Robotic systems also took over jobs like painting and material removal, where fumes and particles could cause health hazards for human workers. These workers were moved behind the robots, where they can learn to become a robot operator, a more marketable skill they would not have had prior to integration.

Robots are also filling the holes that are currently in the job market in certain locations around the world. Because of the boost in service jobs, manufacturing does not hold the same regard that it once did. This has caused gaps around the world for manufacturing companies that need skilled welders and other workers. These companies can invest in robot systems to perform these jobs, which helps when there are not qualified hires for the job.

Overall, robots are not here to take over and leave humans jobless. Instead, they are here to improve the working conditions for industrial workers and give them new skills, while also helping manufacturers fill positions that are vacant.

Are you interested in learning more about robots and the jobs that they can perform? Then you should call RobotWorx, a leading integrator for companies like Fanuc, Motoman, KUKA, Universal Robots, and ABB. Our staff will work with you from the initial consultation all the way through integration of the system into your factory. RobotWorx is dedicated to ensuring the customers are satisfied with their systems and that they return for new automation projects.