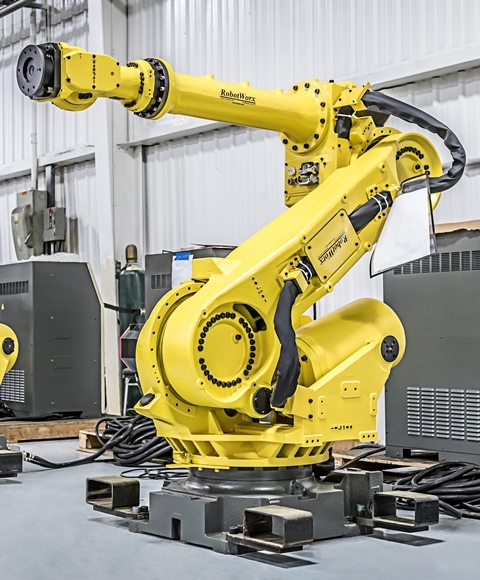 Let’s start off with the differences between the 165F and the 210F. The R2000iB/165F has a 0.02 repeatability and a mass of 1170kg, with a payload capability of 165kg. The R2000iB/210F has a 0.03 repeatability and a 1240kg mass, with a payload capability of 210kg. Both robots have different motion speeds, wrist moments, and wrist inertias. In the eyes of many manufacturers, this is where the differences end.

There are many similarities that exist between the R-2000iB/165F and the R-2000iB/210F because they are part of the same series. Both robots are extremely versatile and can be used for a variety of applications, including automotive spot welding, material handling, part transfer, material removal, dispensing, and machine loading, as well as other general industrial applications, according to FANUC. These robots have a slim arm and wrist, which allows them to fit into confined and hard to reach places, giving manufacturers even more versatility when planning their applications. Each robot also has a 2655mm horizontal reach and six degrees of freedom. Both models can use the R-30iA controller, which allows for advanced motion control, and both have the option of using FANUC iRVision.

For more information about these or other FANUC models, contact RobotWorx, a certified FANUC Robotics integrator, at 740-251-4312 or reach experts online.