What is die-cast robotic machinery? 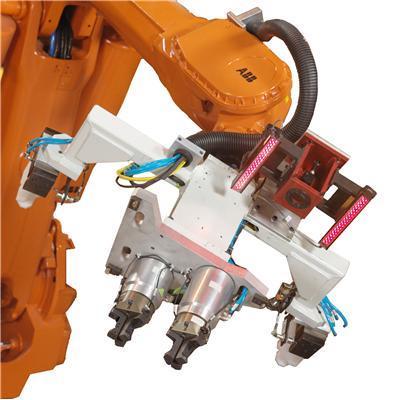 Robots can automate the die cast process by quickly and efficiently pouring molten metal into a reusable mold. Die casting machines are used in a variety of industries and while material handling is a natural application, casting and foundry applications can be challenging.

Die casting Technologies Center devised a way around the problem of how starting up a series and development work can tie up machine capacity instead of allowing it availability for actual production. The company takes on outsourced tasks to get the die cast parts ready for production. Three KUKA KR 125 robots were used to transform an ordinary die casting cell into a fully automated manufacturing cell for a vehicle transmission. The KUKA KR 125 robots can remove parts, spray molds with a parting agent, and load thixocasting billets. They are mounted on top of the machine and spray the mold with a parting agent as soon as the controller releases the part.

AUDI AG needed to invest in a die casting automated solution focused on process reliability, repeatability, short cycle times, and high flexibility. Again, KUKA robots came to the rescue. These requirements were filled by a six-axis Series 2000 KR 210 L150 F KUKA robot. The robot grips the casting by the sprue and removes it from the mobile half of the mold after the mold of the die casting machine opens. The ejectors in the mold eject the casting after the robot controller switches the linear unit to soft axis mode. The robot holds the casting up to an inspection station with sensors to check whether the part is complete. Defective parts are sprayed with a red dot. The robot then sprays and blow dries the halves of the mold.

Fanuc R-2000iS robots are used in part of an automated die casting process for lawn and garden equipment.

Motoman offers IP67-rated wrists on most of their die casting models. High gloss anti-corrosive paint aids in avoiding a sludge that sticks to a robot in a die casting environment. Some die cast robots Motoman offers include the MH80, the MS80w(MH), the ES165D, the HP350D-200, and the HP600D, with varying payloads.

RobotWorx offers many of these robots for a discounted price. Whether you are looking into new or used die casting robots, contact us today for a free price quote online or to get more information call us at 877-762-6881.