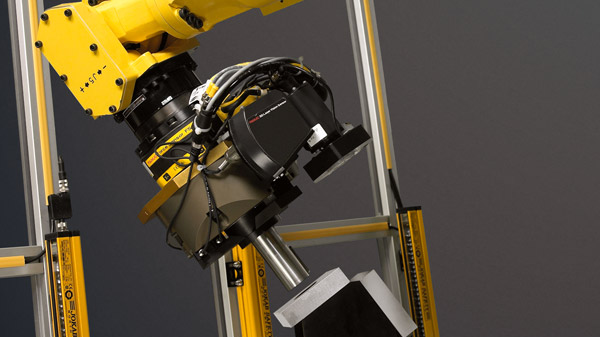 Industrial robots now combine force sensing and robotic vision to create tactile intelligence. These two techniques have been introduced into the industry to increase the proven effectiveness of robots in manufacturing. As we charge on in the automation world, industrial robots are continually receiving upgrades and enhancements as technology is exponentially improving.

As a result, manufacturing is becoming more sophisticated by the day as robots are conquering more precise, flawless, and efficient applications with these advancements. Manufacturers are continuously improving these processes, increasing the production quality, all while achieving lower costs.

FANUC’s force sensors enable an almost human-like sense of touch, giving them the ability to detect force and torque applied to the EOAT in all 6-degrees of freedom. They provide craftsman-like precision and enable robots with a sense of “feel” to help with the most demanding mechanical assembly or material removal operations, such as contouring, measuring, or sanding. Additionally, robotic sanders can perform within 2% accuracy as the the direct measurements of tolerances can be set to create a consistent and repeatable environment.

These force sensors truly help improve product quality and process integrity as they aid in the control of velocity and force when objects are fit, aligned, buffed, trimmed, or assembled. As mentioned, they can detect force and moment (x, y, z, yaw, pitch, and roll) applied to it from external sources.

Applications that Benefit from Force Control and Vision

There are a variety of applications that work with the force control sensors and vision by FANUC. These are as follows: precise fitting of machine parts, gear teeth engagement, push under constant force and product life cycle tests (automotive door operation, switching operations, applications requiring constant force), alignment of flat surface of one workpiece with a flat surface of another workpiece, grinding, or flexible part feeding.

iRVision is also integrated to further enhance part location and evaluation. Intergrated Robot Machine Vision is the integration of a camera interface built into the robot controller. Cameras can be attached to the robot or places in remote locations. iRvision is designed to eliminate the need to place every workpiece in the same way, every time. It is a visual sensor system that can measure the position of each workpiece by using the cameras and then adjust the robot motion to adjust the workpiece accordingly.

iRVision is a great addition to any automated process. Some other benefits include: handling multiple parts at one time, reducing the floor space, making part changeovers a breeze, identifying parts in multiple orientations, locating parts in 2D or 3D, error proofing parts as they enter assembly, increasing throughput, and reducing or eliminating fixturing costs.

In order to be sure all sensors are in good, working condition, FANUC has a built-in force sensor diagnosis that uses instructions to verify each force sensor. Also available are several software features that coordinate with force sensing to determine the force control performance. The force sensor data display in real time is a clear indicator of the performance impact for force control parameters adjustment. This helps to reduce the overall teaching time while also providing instantaneous feedback for production runs, making issues easy to diagnose.

There is a “Teach Pendant Program Auto Generation” to play back the monitored edges of the workpiece in the contouring process with force control. This program is important to help keep speeds and the push force consistent when travel speeds are low or when the robot reverses. This generates an automated TP program with positional information with FANUC iRVision’s Image to Points feature. The iPendant user interface device enables the constant display of actual force variations during the force control operation.

ROBOGUIDE, FANUC Robotics’ off-line programming software, can help in the development of your application as it uses 3D models of actual tooling, robots, and workcell parts to help prove everything accurate and save money and time.

It is easy to see why force sensors and iRVision are now imperative on the production line. Whether it be for assembly or sanding, the combination will provide an increase in productivity and high precision. Equally beneficial are the facts that there is complete integration into the robot for faster processing, the support of practice-proven standard functions, and robust hardware and intelligent software for reduced cycle times. Additionally, the setups are fast and easy, thanks to easy integration and fewer parts to help maintain maximum up-time.

For more information, contact RobotWorx representatives today online or at 740-251-4312.