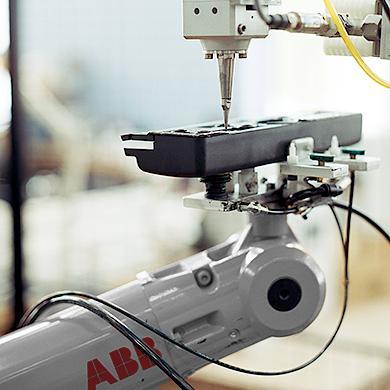 ABB is a leading supplier of industrial robots throughout the world. They focus on improving productivity, product quality, and worker safety for manufacturers. ABB’s key markets include automotive, plastics, metal fabrication, foundry, solar, consumer electronics, wood, machine tools, pharmaceutical, and food/beverage industries. ABB is constantly striving to update its robot models to stay on pace with technological demands and changes.

ABB’s latest creation, the IRB 6660 100/3.3, is 15% faster than its counterparts. The IRB 6660 is an industry favorite, and this new version has an extended reach to 3.35 meters. It increases the distance between press lines and can handle larger blanks with short cycle times. This model is recognized as the fastest press tending robot on the market for large blanks.

Another impressive new model is the IRB 360 FlexPicker model. This robot expands the high speed picking and packing performance of the most widely used delta robot in the industry, now allowing it to pick even heavier items. The IRB 360 FlexPicker model simulates a carton loading application by picking five liquid-filled plastic bottles in a single cycle and places them on a conveyor. It then uses vision guidance to pick the randomly oriented bottles and place them in uniform groups back on the conveyor.

The IRB 6620LX is an industrial robot on a linear gantry. Its advantages are those reserved for both linear and 5-axis robots, resulting in a 6-axis robot with a 150 kg payload capacity, large work envelope, and flexibility from its articulated arm. It is mainly used for machine tending, material handling, welding, assembly, and grinding.

The FlexPainter IRB 5500 has a unique design to earn the title of largest and most flexible robot working envelope of any exterior car body paint robot. This model reduces the air handling volume for ventilation, as well as the emissions from booth exhausts.

ABB offers a comprehensive range of industrial robots to meet their customers’ needs. It is as simple as choosing a robot by application, payload, or reach. Some popular articulated robot choices are the IRB 120, IRB 1520ID, IRB 4400, and IRB 6640. The IRB 6660 can be altered depending on the manufacturing specifications: press tending or pre machining.

As important as the robot models is the technology that allows them to perform their operations. ABB also manufactures robot software, peripheral equipment, process equipment, and modular manufacturing cells and service.

ABB’s force control technology allows robots to be able to handle variations in the manufacturing process with real-time external inputs – like a human would. ABB Integrated Force Control enables the robot to react to its surroundings and deviate from its programmed path or speed based on feedback from the force sensor. Automation can now occur for complex tasks that have not been possible before. Integrated Force Control can be used to improve robotic machining applications like grinding, polishing, deburring, and deflashing.

RobotWorx is a certified integrator of ABB robots. We offer new and used ABB robots at a reduced price. Contact us today online or at 877-762-6881 or hit our