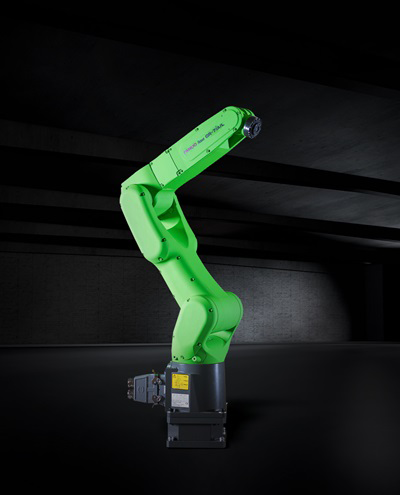 FANUC has done an incredible job innovating and keeping pace with what is currently driving the market. This was recently seen with the CR-35iA robot as the biggest and strongest collaborative robot to effortlessly show the world the beauty of combining the power of the robot with the flexibility of an operator. Carrying a 35kg payload, the robot attracted exceedingly high amounts of interest amongst an array of industries.

So, FANUC made the next logical decision. They introduced a lower payload collaborative robot, the CR-7iA, whose mechanics match the company's LR Mate-series (LR Mate 200iD). This smaller robot will allow FANUC to cover different payloads and reaches in the collaborative category. With all these innovations, almost any task needed can now be achieved with a single robotic manufacturer. Well done, FANUC!

If you aren’t familiar already, collaborative robots have increased protective functions and the ability to work side by side with human workers without any barriers. Operators will have the new found ability to use their cognitive and sensory capabilities right next to this robot, thus creating a most effective team of man and machine.

Another huge advantage to these two green robots is that they are super sensitive to impact. Located in the base, the force torque sensor is super sensitive and will stop when it reaches the parameters that have been set for force variations. Another plus is that the whole robot will restart with the push of a button. There is also an external skin that covers pinch points and sharp edges which helps to further reduce the force of an impact.

If your company is familiar with Fanuc robots and is used to the robot software, than the transition to collaborative robots would be simple. It would consist of quick program and knowledge integration transfer from current robots to the new cobots.

The robot is supposed to make a grand appearance at the TechniShow (Netherlands) in March, the Industrie fair (France) in April, the MACH Show (UK) in April and the Automatica fair (Germany) in June. This is one robot you don’t want to miss!

We love how the robotic industry is in a state of constant evolution! Seeing the robotic industry pressing forward with neat innovations, including these cobots, is promising for all of us! We won’t be surprised when the collaborative robot market quickly booms worldwide!

Are you interested in learning more about the collaborative robots listed above, or any of the traditional industrial robots available from the companies in this article? Then you should contact RobotWorx, an integrator for FANUC, Motoman, KUKA, Universal Robots, and ABB. Our staff will work with you to help you design and build the best robotic system for you and your facility.