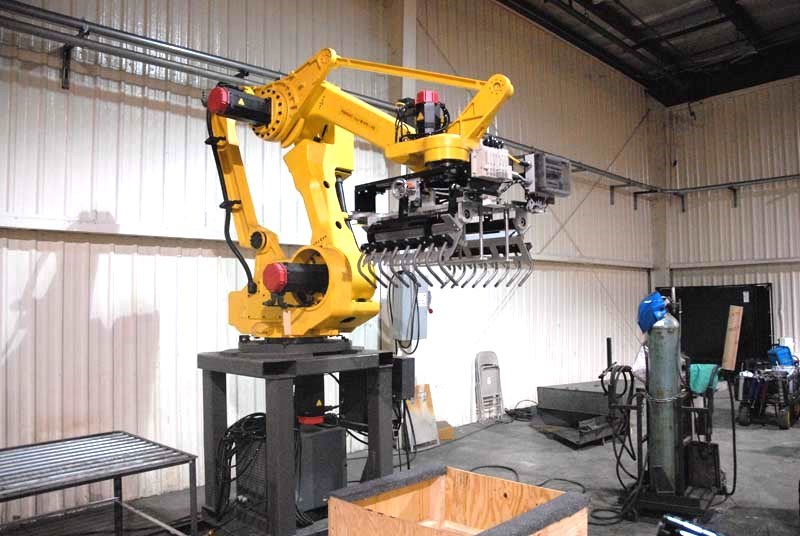 Palletizing a product can be one of the easiest process steps to automate in a production line. Automating this step not only keeps workers from hurting their backs, but also can greatly increase production speed and eliminate bottlenecks. There are many different industrial robots available for palletizing these days, but the perfect robotic palletizer must possess certain qualities. It should have exceptional vertical and horizontal reach, it should be sturdy with high wrist inertia, and it should be fast and accurate.

Many industrial robot manufacturers – including FANUC, Yaskawa Motoman, ABB, and KUKA – have worked to perfect their palletizing robot models and lines, designing their robots to perform at top speed and quality for their customers when palletizing or de-palletizing products and parts. RobotWorx has a lot of experience integrating palletizing robot systems. Here is an overview of some of the more popular robot palletizers available:

The FANUC robotic palletizing line is quite impressive. Ranging in payloads from 100 kg up to an impressive 1200 kg, these robots provide solutions for a variety palletizing needs. Slim arm design and heavy-duty components allow FANUC palletizing robots to cut cycle times and increase throughput.

We recommend checking out the entire FANUC R-2000iA and R-2000iB robot series. These are all great options for palletizing operations. One example, the R-2000iB/100H is a 5-axis robot with a 100 kg payload capacity, while being remarkably compact and slender. It is fast, with the ability to palletize 20 cycles per minute when handling cases and 22-24 cycles per minute when palletizing bags. The R2000iB/100H is also capable of palletizing up to 81 inches when working with a standard 40x48 inch pallet. The FANUC R-2000iB/210F is also a popular model used for palletizing.

Motoman’s current palletizing line, the Master Palletizing (MPL) robot series, consists of six robots that range from 80 kg to 800 kg payload capacities. With quick speeds, a compact form and through-routed cabling, the Motoman MPL palletizers are designed to increase throughput. Their wrist movement of inertia are exceptional, making them some of the sturdiest robots in the industry.

One of the palletizers in the MPL line, the MPL160, is an exceptional model that offers high reliability, performance, and ease of use. This highly versatile model is ideal for palletizing a variety of products, while also having the ability to perform layer handling and pallet handling functions. This MPL robot is able to use a conventional robot controller or a PLC controller.

On the smaller end of the line, the MPL80 is great for end-of-line palletizing, especially when the factory or layout require a smaller footprint. The throughput cables on this and other MPL robots cut down on wear and tear, significantly reducing the amount necessary to maintain the robot over its lifetime.

ABB also offers a variety of palletizing robots. These robots range from a payload capacity of 10 kg up to 500 kg and reaches from 1650 mm to 3500 mm, giving them a high level of versatility in the small, medium, and large palletizing markets.

One of the leading compact palletizing robots from ABB is the IRB 460, a robot that is the fastest robotic palletizer in the world, according to ABB Robotics. This robot model is capable of up to 2190 cycles per hour, making it a perfect end-of-line or bag palletizer, with a small footprint for manufacturers with limited space.

Need a robot that can palletize heavier products while still maintaining high speeds? The IRB 760 from ABB may be the perfect palletizer. This robot has the ability to lift up to 450kg and can reach up to 3200mm, all with a wrist inertia double that of competitors, ABB states, which allows it to rotate heavier and larger products faster than any other robot.

Some of the other recommended, popular ABB palletizers include the IRB 660 robot and the IRB 7600 (which has 5 payload variations) robots.

KUKA has an extensive palletizing line that offers more than 11 different models. Built with carbon fiber composite, these robotic palletizers are fast and lightweight, while still remaining sturdy and durable. KUKA’s PA robots range in payload from 40kg to 1300kg, and they come in different axial configurations, including one two-axis mode, the KR 50 PA.

At one end of KUKA’s palletizing line is the 4-axis KR 40 PA, which is capable of high speeds, accuracy, and a vertical reach of 1,600mm. The flexibility and dexterity of this model, combined with its lower payload capacity, makes it a useful industrial tool. Need to reach higher? KUKA’s answer is the KR 100 PA and KR 180 PA. They can palletize as high as 3m.

At the other end of the spectrum are the KUKA Titan robots, the KR 1000 L950 titan PA and KR 1000 1300 titan PA, provide extreme payload and reach abilities. These robot models make moving large work pieces easily and stress-free.

If a manufacturer needs something that falls between these two extremes, the KUKA KR 700 PA is a great choice. The KR 700 PA combines exceptional speed with a reasonable payload. It is capable of handling up to 15 cycles per minute when working with typical palletizing distances of 400/2000/400 mm.

We have over 25 years of experience integrating robots used for palletizing operations. We help customers make educated decisions as to which robot brand and model is right for their operation and optimize production flow. We have handled hundreds of palletizers with different end of arm tooling and grippers that are specific to the product it is handling. We also have New and Used palletizing robot models available to provide a larger affordable selection. Let us help you optimize your production flow - Call us at 740-251-4312 or fill out our Contact Form and our experts will quickly respond.